I’m a coffee drinker for the most part. But I love a good, hearty tea when the autumn weather turns nippy. How about you? A new favorite is Trader Joe’s Harvest Blend.

Recently, a friend and I conducted an informal taste test of herbal teas. Among the cinnamon tea blends, we concluded that Trader’s Joe Harvest Blend was the best tasting. This is our opinion, of course. Yet others who tried the tea quickly headed to the store to buy it. They then gave tea bags to other people who then bought their own box of the tea. Yes, my friend and I are tea pushers. The first bag is free. 🙂

Isn’t it interesting that something steeped in hot water can produce such a rich, memorable flavor? Sounds like life, doesn’t it? (Work with me here. It sounds like life, doesn’t it? Just nod your head.) When we’re in hot water—troublesome circumstances—the flavor of our character is revealed. Are we bitter, as some tea is when steeped too long? Or do the “hot” circumstances bring out the best in us?

The subject came up as I recently pondered my reaction to disappointing expectations and problems. As others announced the joyous news of book deals, I contemplated the lack of positive news in my mailbox (including a no for the YA book I queried earlier this year). I soon realized that a thread of bitterness had crept in and wound itself around me, leaving me complaining and paralyzed. Kind of like a mummy in a sarcophagus. Only . . . mummies don’t really complain, do they? And if they’re of the undead variety, they’re not really paralyzed either. Instead, a mummy might break out of his or her sarcophagus and lurch about, terrorizing villages. So that metaphor is a bit labored. But you get what I mean.

A couple of quotes struck me recently:

I guess it’s time for me to stop whining and do what I know to do: write and keep going. To celebrate the power of persistence, I’m giving away a box of this Harvest Blend Herbal Tea and some crocheted leaves. (If you want to know more about these leaves, click on crocheted leaves to get the pattern, which was designed by Michelle at The Painted Hinge blog.) I’ll choose a commenter at random. Feel free to comment on a tea you love or some aspect of autumn you love. Or talk about which quote above speaks to you. Perhaps you have another favorite quote about persistence. Winner to be announced Friday, November 6. 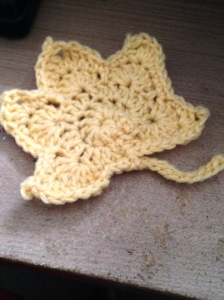 If you’ve never seen Futurama, an animated sci-fi show created by Matt Groening, what I’m about to relate won’t make any sense. Go here if you want to be in the know. In Episode 3 (“I, Roommate”) of season 1 (written by Eric Horsted), one of my favorite scenes involves Leela catching Fry as he uses their delivery ship’s exhaust to dry his hair after a shower.

Leela: You’re getting a huge dose of radiation!
Fry: And great lift!
Leela: Ugh, do you know how long it’s going to take me to recalibrate these engines?
Fry: Hey! When you look this good, you don’t have to know anything.

Fry’s last comment came to mind after I headed to the phone store to pick up my 99-cent smartphone upgrade. I had long resisted upgrading to a smartphone due to cost. But 99 cents I could handle (though I wound up with a different phone; long story). So, as I admitted why I balked for so long about joining the smartphone crowd, I told the sales guy, “I didn’t want to have to figure out a new phone.”

Wow. My parents would be appalled that I admitted to someone, in a proud-to-be-ignorant fashion, what I didn’t want to know. 🙂 And I don’t have the moxie to declare like Fry, “Hey! When you look this good, you don’t have to know anything.”

The conversation at the phone store caused me to think of what I’ve settled for over the years, namely, complacency about my lack of knowledge. When I was a kid, I greeted with joy every opportunity to learn something new. But what is it about becoming an adult and leaving school that makes me blissfully accepting of the breadth of my knowledge? It’s like that old Far Side comic by Gary Larson: 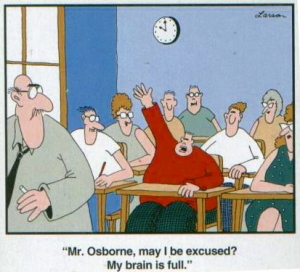 I complain at the drop of a hat about having to make an effort to learn something new. And a cell phone is far less challenging than differential equations or quantum physics. (And I truly wish I’d gone farther in physics than I did.)

This complacency extends to writing. If I write novels (I reason), I don’t have to know how to write a picture book, a sonnet, a screenplay, a tanka, a graphic novel script, or a short story. I don’t have to grow or change. I can be happy with my usual box of tricks as limited as they may be. Except I’m not really. And complacency keeps me from admitting what’s really behind my decision to cling to ignorance: fear of failure. Fear of trying something new and failing at mastering it right away. I have no idea where that fear came from. But it’s kept me away from a lot of great things and great places. And for what? So I could tell a guy in a cell phone store what I don’t want to learn?

I’m convicted by this quote by Thomas Edison:

None of my inventions came by accident. I see a worthwhile need to be met and I make trial after trial until it comes. What it boils down to is one per cent inspiration and ninety-nine per cent perspiration.

Trial after trial. Perspiration. Making an effort to educate oneself—no matter how long it takes. It’s never too late, huh? Look at Grandma Moses, who took up painting while in her 70s.

What do you want to learn?