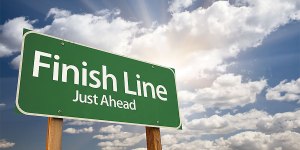 One of the things I find fascinating about The Great British Baking Show (as it is known here in the States because of Pillsbury; it is The Great British Bake Off where it originated) is the fact that you can win the accolade of Star Baker—the best baker—in one week of the competition and be sent home crying in another. It’s what you do each week of the competition that counts—particularly the final week. (Don’t worry. I won’t give any spoilers.) You can see this scenario played out in any of the series on Netflix (or wherever you watch the show). So, winning Star Baker is not an iron-clad guarantee that you will win the whole competition. 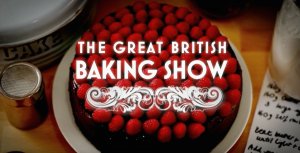 A good motto for the show is, “What have you done for me lately?” On this show, you can’t coast on your laurels. You have to prove yourself every week to the very end.

This is the concept of finishing well. Haven’t you’ve seen Olympic runners tragically stumble before crossing the finish line, or a gymnast execute a perfect tumbling run only to stumble out of bounds—or worse—fall and injure himself or herself? And how many of us have mourned when our favorite sports team choked in the last minutes or the last game of the championship?

And who can forget the hoopla surrounding the eighth and final season of Game of Thrones—a show highly favored until the last season?

I’ve read book trilogies and viewed movie trilogies with endings that disappointed me to the point where I wished I’d never started the journey in the first place. Have you? Some of the trilogies I’ve regretted reading had endings that felt rushed or tacked on. In all fairness, the downside of some publishing efforts is that some authors spend years on the first book but are only given a matter of months to finish the second and the third.

And I know: art is subjective. The same trilogies I’ve disliked were liked by many people. You can’t please everybody! But there are some series with endings so satisfying, they have become regular destinations for me. One of those is The Lord of the Rings. Another is Avatar: The Last Airbender (the animated series, not the movie). (I realize that fantasy is not everyone’s cup of tea. 😀)

I’m impressed by the fact that the Avatar series creators, Michael Dante DiMartino (right) and Bryan Konietzko, knew the ending of their series well before that season ever aired. In Avatar: The Last Airbender—The Art of the Animated Series (Dark Horse Books, 2010), DiMartino and Bryan Konietzko explain what happened during a meeting they attended to discuss the show:

We pitched for over two hours, describing the four nations, the entire story arc—all three seasons’ worth (12).

So, before the show was ever greenlit, they knew what was going to happen. And the show ended pretty much on par with that pitch meeting. Many fans and critics agree that this series is one of the best animated series ever made. Ending the series took four episodes! But it was one of the most satisfying endings to a series I have ever seen.

Finishing well is definitely not an easy undertaking. If you’ve ever run a race, you know that your strength begins to flag before you reach the end. When my brother ran the Chicago marathon, he said that around mile 20, he was ready to quit. But he tapped into a well of determination to cross that finish line. (We enjoyed some great snacks when he did. 😄)

The road to finishing well begins with finishing what you started. But that’s just the beginning, especially in writing! For many who have written a story, an article, or any book, you know that finishing a draft leads you to the beginning of another journey—that of revision. But revising helps you finish well.

What do you do to ensure that you finish a story or some other project well? What series have you read that finished well?

With Thanksgiving Day approaching here in the States, you probably expect to see a post on gratitude or family—a subject people normally write about at this time of year. And I have seen a number of thoughtful posts along those lines.

But this is not one of those posts.

It’s not that I’m ungrateful for the blessings of family or a holiday in which you can eat till you drop. (Every holiday in my opinion.) And I had every intention of writing one of those Thanksgiving gratitude posts. But instead, I can’t help writing about the gift of laughter. 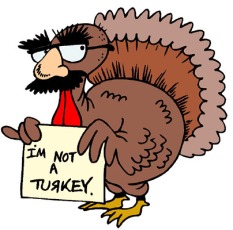 Nancy Hatch over at Spirit Lights the Way usually writes about this subject much more eloquently. If you follow her blog, you can probably recall a post or two. But the reason why I’m thinking about laughter is the fact that I discount the power of laughter sometimes. Yet a sense of humor is one of the traits I look for in a friend.

Years ago, I remember laughing with some friends as one of them told a story about a friend of his. Even after six years, we still laugh about that story. Sorry. I don’t have permission to tell it. There’s a chance you wouldn’t find it even remotely funny. But the first time I heard it, for a solid week it made me laugh every time I thought about it.

The fact that we can laugh at all these days seems like a miracle, especially with all of the sad things happening. Grief has a way of piercing the heart. But laughter does too, in a different way.

I guess I’m stuck on the power of laughter because I know what depression is like. It’s like a place with endless gray walls and not a speck of light. That’s why I treasure laughter. it brings the light in.

I remember reading Terry Pratchett’s book, The Wee Free Men, for the first time when I was feeling down. It made me laugh really, really hard. I searched for my copy of it as I thought about this post, but couldn’t find it. It has a tendency to wander about. But it always turns up when I need it. I laugh every time I read it. 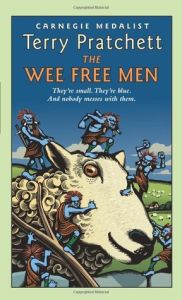 You already know this, but in case you don’t, here is one of the health effects of laughter, which this post at healthguide.org describes:

What was the last thing that made you laugh really hard?

May your holiday season be filled with laughter.

Though ’tis the season for Thanksgiving, Kitty is already planning her Christmas scheme. She plans to sit on the sidewalk and ask people for money. Her motto: “Give till it hurts.” 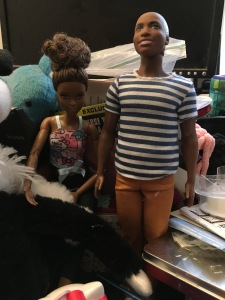 Barbie and Ken can only roll their eyes. But somehow they’re thankful for the laughter their adopted daughter Kitty bringing into their lives. 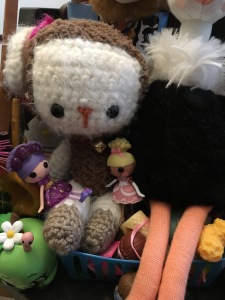 After eating copious amounts of turkey, these friends plan to binge watch their favorite show, The Great British Baking Show. And of course they will have pie as they watch it.

Recently, my nephew got me hooked on The Great British Baking Show, which I watch through Netflix. Have you seen it? This show has been on for years, and I just learned about it. If you’re unfamiliar with the premise, it involves amateur British bakers competing in three baking challenges each week.

Their efforts, at least in season 1, were judged by Mary Berry, who writes cookbooks, and Paul Hollywood, a well-known chef. I wasn’t familiar with either person. They both frighten me. Paul has a piercing stare. Mary Berry makes me think of the “prunes and prisms” comment of Mrs. General in Little Dorrit by Charles Dickens. 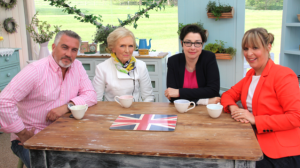 If you decide to watch the show, I would advise you to have some baked goods on hand. Otherwise you’ll be extremely hungry.

What I love about the show is the fact that the bakers are told to bake something within a time limit, but aren’t given any other instructions. Like one week, they were told to make a Swiss roll. Another week, they had to make a “self-saucing pudding.” I would have stood there, staring stupidly at the hosts. But the bakers rose to each challenge using their creativity. 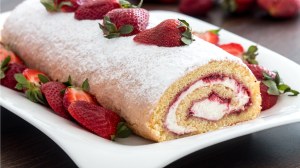 One week, one of the bakers threw a slight temper tantrum after a mishap with his dessert. Instead of showing the judges what he had, he tossed his dessert in the garbage, rather than present something flawed. The others watched, horrified, as he stalked away.

Actually, I can see why he did that. The judges never hesitate to tell the bakers what’s wrong with their creations. “This is a mess.” “This tastes burnt.” “You should have left it in five more minutes.” But because the bakers love to bake (and love to be on the show), they willingly put themselves out there.

I can’t help thinking of the process of writing. A writer sits down to write without being given any instructions. Oh, there are tips here and there on world building and creating memorable characters. But a tip can’t really guarantee that a book, a screenplay, or a poem will turn out well. After completing the work, he or she then might show the work to a beta reader or an agent or an editor and run the risk of scathing criticism. But a writer puts himself/herself out there, hoping someone will love his/her creation.

Have you ever thought about writing something totally outside of your comfort zone—like many of the challenges the bakers faced on The Great British Baking Show? You might fail or you might succeed. But does failure mean you shouldn’t try, even if you’re not sure about what you’re doing? 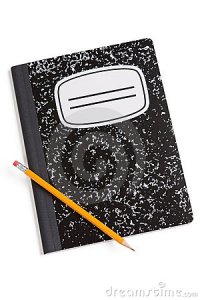 Like the baker who threw away his presentation, I’ve thrown away whole novels, because I thought their flaws were too great to fix. But with one novel at least, I’d like to start over with new characters. I still like the basic idea of the novel.

Watching The Great British Baking Show reminds me of the value of taking risks and trying something new, instead of always playing it safe. Even if I don’t exactly know how to do something, that doesn’t mean I shouldn’t try it.

How about you? Facing a challenge? What will you do?

Kitty thinks she could have been a contender on The Great British Baking Show. For obvious reasons.