This weekend, we celebrated my younger brother and sister-in-law’s silver wedding anniversary with “a party of special magnificence.” (If you’re up on your fantasy novels, you’ll know that reference. If not, scroll down to the end of the post to find out where this quote came from.)

Yet the joy of the celebration was tempered not only by those who were invited but couldn’t come for various reasons, but especially by the arrival of Hurricane Harvey and the flooding of Houston. My parents and older brother and sister-in-law live on the outskirts of Houston. A tornado recently hit that area, thanks to the hurricane. Also, the sister of a friend lives in Corpus Christi where the hurricane landed.

After some phone calls, I’m relieved to mention that all are safe. Yet so many people are struggling right now, as you can see on the news, thanks to the rainfall.

My cousin, who had come to celebrate with us, mentioned that her husband is preparing to head down to Texas for storm duty. He works for an insurance company, so he has long hours of work ahead of him.

As the party wound down, we stared at all of the pans of untouched food, wondering what to do with them. My brother and sister-in-law finally decided to take the food to a nearby homeless shelter. Wouldn’t you know it? When they walked in, the workers told them that a record number of people had shown up that day and they weren’t sure what to serve them. In walked my brother and sister-in-law with the solution.

I sat outside after returning home from the party. The gray sky had a bruised sort of look to it, almost like it too mourned what was happening down in Texas. And I felt sort of bruised too. Bruised, but still hopeful.

Life certainly has some highs and lows, doesn’t it? From the wonder of the solar eclipse to the horror of Hurricane Harvey. There’s also the unrelenting sadness of homelessness. But as we saw on the news, people reached out to rescue those in Houston who were trapped in flooded homes. And a homeless shelter in Illinois was able to serve those in need, thanks to some party guests who didn’t show up.

P.S. The quote at the beginning is from the first paragraph of chapter 1 in The Fellowship of the Ring by J. R. R. Tolkien.

Happy Eclipse Day—the first total solar eclipse in 38 years that we’ll be able to see here in the States! Some friends traveled to Carbondale, Illinois for this occasion since that’s the place where it can be viewed the longest. 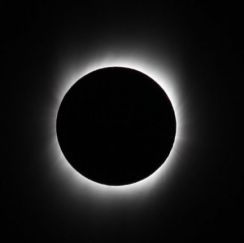 Try as I may, I’m not always able to capture, via my phone’s camera, all of life’s amazing moments. Like the time aliens took over New York, but were stopped by the Avengers (thus freeing us to all have shawarma at the end). Or the time when the evil peace-keeping robot (what an irony) threatened to destroy the world, and the Avengers had to help out again.

Okay, those events happened on the big screen, instead of in real life.

But I can’t help thinking of last week when I witnessed a territorial fight between two male hummingbirds. I immediately thought of Jill Weatherholt, a blogger/author you undoubtedly know. Lest you get the wrong idea, I didn’t think of her because of the fight. Jill has shown me photos of the hummingbirds around her house.

I was seated near the balcony at the home of some friends after their hummingbird feeder had been refilled and placed on the balcony. The usual ruby-throated hummingbird soon landed on the feeder. Let’s call him HB-1. I mentioned “usual,” because one of my friends told me this hummingbird usually came to the feeder. But this day, a rival came too—HB-2.

Pretty soon, tiny wings beat the air even faster, while long beaks jabbed. After a bob and weave, HB-1 got the better of HB-2 and forced his rival to fly away. Sadly, my phone was nowhere near me at the time, so I did not get pictures. 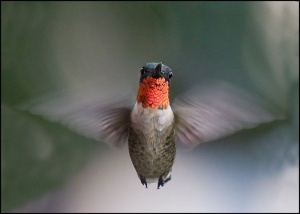 Nor was I able to capture something that happened at a birthday party I went to recently. The birthday child was a little girl who turned one. Over forty kids were present. One of the games they played was one involving a box wrapped with about fifty layers of wrapping paper. The kids sat in a circle and passed the box around, each unwrapping one layer, hoping to be the one who reached the last layer. That kid would have the privilege of claiming what was inside the box.

The kids gave that box the care and attention a neurosurgeon would give a patient. Every time the kids thought they’d reached the end of the wrapping paper, still more layers would appear. Without knowing what was in the box, they were fully invested in solving the mystery of what was inside. I was the one tasked with picking up the discarded wrapping paper, so I didn’t have a free hand to snap a photo. But I loved the fact that the kids were riveted by a wrapped box, rather than some expensive video game. (Lest you think I dislike video games, let me admit to you now that I play them. Just sayin’.)

Neither of these moments has the awe-factor of a solar eclipse, I know. But life has these little moments of mystery and wonder—moments too quick or too powerful to capture on film. Like the time a two-year-old hugged me around my knees. Like the laughs I shared with friends last week. I’m glad I was fully present, enjoying those moments, instead of fumbling for my camera.

But I was able to capture this butterfly not too long ago. He sat still, allowing me time to photograph him (though I wish I’d managed a closeup).

What moments have you enjoyed recently that took your breath away, but that you weren’t able to record on your camera?