When I told my dad about the butterfly and moth post I wrote recently, somehow we got on the subject of snakes. . . . Oh I know why we did. We were talking about crawfish (or crayfish if you prefer) and how I’d seen some in our backyard, along with snakes.

He said that yes, there were burrowing crawfish in a hole in our yard, maybe two years after we moved into our house in Chicago—a house that had been newly built at the time. (Wondering about burrowing crawfish? Check this or this or even this.) And there were snakes too. When I was seven, I remember being terrified of a green snake crawling along the sidewalk in the front of our house, and wondered how it got there (after I finished screaming). Well, mystery solved finally on the snake front, after all of these years.

“Your brother brought them home,” said Dad. (Note the plural pronoun them.)

My older brother and his best friend, both nine years old at the time, had gone exploring around an old factory (later torn down due to the expressway extension by our house) and brought home souvenirs—snakes to live at our house. Perhaps the others escaped their clutches. But one decided to linger at our house. When I saw it, I didn’t want to go outside ever again, especially since the snake chose to slither into the bushes at the front of the house.

“Oh girl, the snake’s not poisonous,” said my sympathetic parents. (Keep in mind that I was a city kid and had never seen a snake before, outside of a reptile house at the zoo. My parents had been raised on farms in a different state, and could readily identify a poisonous snake, having seen them.)

So I have my brother to thank for my trauma. I should have known. He also was the one who favored the old snake in a can gag.

But how to thank him properly? Unfortunately, he lives over a thousand miles from me, so I can’t send a snake his way.

I had to Google to find out. Turns out I could through Ship Your Reptiles.com! It’s nice to know that I have options. Mwwwwahahahaha!

But this brings to mind another incident involving snakes. Back in my early days as a curriculum editor, the managing editor brought his pet boa constrictor to the office and parked him in one of the conference rooms. I was curious and a little bolder than I was at the age of seven, so I drifted into the room where a crowd had gathered. But I flinched as the snake’s head edged toward me. 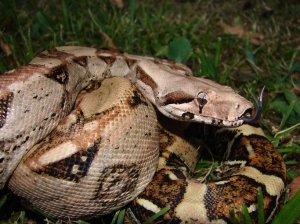 “Oh, let him crawl up your arm!” said the managing editor. “He’s friendly.”

Haven’t we all heard that one before, usually in regard to a snarling pet who might be friendly to the owners, but not to strangers? I didn’t want to look like a wimp, so I did. The boa was very smooth as he made his way up my arm. But since he did not provide flowers or candy nor ask for my phone number, our relationship was brief.

I can only hope that in the future no one else decides to surprise me with a snake. If anyone’s going to do the surprising, that person’s gonna be me. 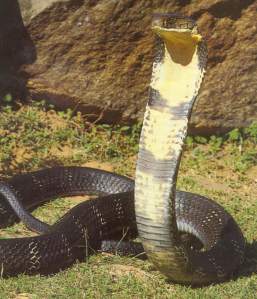 If you think of it, say happy birthday to Andra Watkins, who is two thirds of the way through her Natchez Trace walk! This is one for the history books!

Snake photos from Wikipedia. Snake in a can from ebay. Birthday cake from great-birthday-party-ideas.com.