When I was a kid, my mother taught me to sew by hand. Though we didn’t own a sewing machine, she said I needed to learn the basics, like sewing on a button or sewing a hem on pants or a skirt. So I learned two basic stitches—the running stitch and the whip stitch. Later I bought this book, which lists other stitches. (This article lists some of the stitches I learned.)

Sewing anything by hand takes time and patience, especially if the goal for whatever you’re working on is that it be neat and durable. One day, however, I’d like to learn to use a sewing machine. (My sister-in-law has one.) That would certainly save time.

As I pen this post about hand sewing, I can’t help thinking of how I used to write everything—stories, poems, and even novel drafts—on legal pads or notebook paper. But when I acquired one computer after another, I stopped writing most things by hand, with the exception of some letters and some journal entries. (Yes, I still write letters. Not a ton, but a few in a month.) 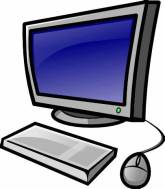 The thing is, I type faster than I write by hand, which is why I turned to the keyboard many years ago. I reasoned, why not cut out the middle man by writing on the computer, rather than writing on paper and then having to type my handwritten text. But the words I’ve sown by hand on paper seem to have more depth. When I take time to physically write, I wind up writing more.

At first I thought that was just my perception. But an online article “Your First Book: Handwriting vs. Typing. How to Write It?” by Zoe Nixon states

Depending on the individual, some people confess that writing by hand allows their creative minds to work easier than when they type.

Here is yet another article on the subject: https://www.simonandschuster.com/getliterary/benefits-writing-longhand-versus-computer/

While I doubt that I’ll return to writing a whole novel by hand, I know the value of writing tricky scenes by hand. As one of the above articles suggested, I often doodle as I write. If I have multiple characters to maneuver in a scene, drawing their positions on paper (standing or sitting? punching first or dodging?) helps me write about them more effectively. This tactic also helps me discern if a scene is too overcrowded and in need of adjustment.

What about you? Do you first write by hand or do you enter your text on a computer first? Let me know in the comments! 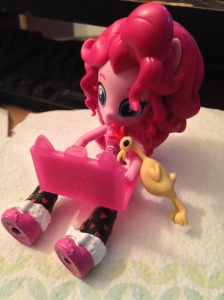 Though her chicken is excited at having written her first novel, Pinkie Pie thinks it needs a revision. All of the dialogue consists of only one word, “Cluck.”

Computer from somewhere on the internet. Other photos by L. Marie.Pinkie Pie, computer, and chicken are from the My Little Pony Equestria Girls Minis Pinkie Pie Slumber Party Bedroom Set by My Little Pony.