Ever have a dream where you’re being chased by a serial killer? You’re racing along, certain to be caught, your breath ragged with fear. But suddenly, you launch yourself into the sky. You have the power of flight! Woo hoo! Yeah, baby! 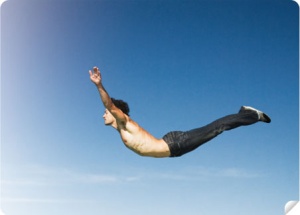 Psychotherapists have many interpretations of this sort of dream. But this post isn’t about those. The flying dream came to mind as I thought about the way paranormal aspects are introduced in a novel.

I usually get into a snit when I’ve read several chapters of what seems to be a realistic novel only to discover a sudden turn toward the paranormal. Don’t get me wrong. I love fantasy stories. I also love realistic stories. But if several chapters where everything is normal go by before even one fantastical element is introduced, my bait-and-switch meter starts ticking. My irritation doubles if the book jacket mentions paranormal, but the first 50 pages of the book fail to show anything that could be construed as fantastical.

You can thank author Jen White for helping me understand why I feel irked. She wrote a great post at Through The Tollbooth that I highly recommend: “Survival Strategies of the Best First Chapters.” You can read that post by clicking on the post title. White talked about a promise made between an author and a reader. Here’s a quote from that post:

As an author you promise to stay in character and to stay in genre. You promise to keep story threads alive and fruitful. The first chapter says: This book is about…(and then stay true to that statement).

You promise . . . to stay in genre. . . . When a novel pivots toward a different genre than the one the first chapter sets up, the author has broken his or her promise to the reader.

In a dream, think of a sudden ability to fly as the introduction of a paranormal element into a story. The compressed time frame of a dream makes for a swift integration of the fantastical element. Our minds readily accept it. An author has to work harder in a book to get a reader to suspend disbelief. Though an author has more time to lay out a plot in a book, he/she has to help a reader see the integration of the fantastical elements and the realistic elements early on, especially if the book is set in our world. Otherwise, acceptance of the elements won’t come as readily.

Here’s the first paragraph of Holly Black’s young adult novel, The Darkest Part of the Forest:

Down a path worn into the woods, past a stream and a hollowed-out log full of pill bugs and termites, was a glass coffin. It rested right on the ground, and in it slept a boy with horns on his head and ears as pointed as knives.” (Black 1)

With a beginning like this, a reader would know that this world is not exactly like our own. And Black follows through on the promise inherent in this paragraph: that the reader will be taken on a fantastical journey. But does this mean every author has to introduce fantasy elements in the first paragraph? Nope. Instead, foreshadowing is a great tool an author can use. It’s like a promise an author makes to a reader early on that a story eventually will pivot toward the fantastic. For example, in the first chapter of The Lion, the Witch and the Wardrobe by C. S. Lewis, when the Pevensie kids arrive at their wartime home, we’re told

It was the sort of house that you never seem to come to the end of, and it was full of unexpected places. (Lewis 4)

Unexpected places. With those two words and the introduction of the wardrobe in the same paragraph, Lewis sets up the promise of a fantastical adventure, one that he keeps in the first chapter. If that’s not enough evidence for you, look at the foreshadowing in the first paragraph of Harry Potter and the Sorcerer’s/Philosopher’s Stone. I won’t print it here, since I’ve quoted quite a bit in this post. Chances are, you have a copy of this book handy and can see for yourself. 🙂

Both of these books have delighted people of all ages for many years. Our books can do the same if we keep our promises.