When you see photos like the ones below of girls talking in a group (just hanging out at a sleepover or at some other gathering), what do you imagine they’re saying to each other? (Okay, yes, I know they’re all dolls of a sort. Just pretend, okay?) 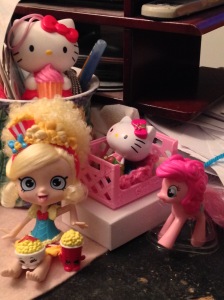 Now look at the photo below. Think of them as boys having a conversation. (Um the one in purple is Batzarro, who is in Lego DC Comics Super Heroes: Justice League vs. Bizarro League.) What do you think they’re discussing? Sports? Quantum mechanics? Girls? Cars? Videogames? Collections of tiny things like Shopkins? 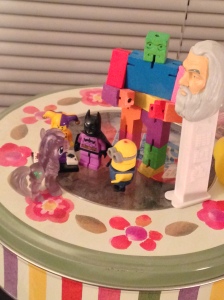 Many of us have preconceived ideas about what girls or boys talk about or like. Some of these ideas have to do with how we were socialized, and the expectations with which we grew up. You know the ones: girls like dolls and colors like pink and purple; boys like cars and trains and colors like blue or green. Girls talk about boys and hair at a sleepover. If a kid stepped out of the “bubble,” he or she was “corrected,” sometimes by other kids.

Think times have changed, now that we’re so “enlightened” about preconceived gender issues? Think again. A little boy I know used to love the color purple until he was told by another kid that purple is a “girl” color.

If we have kids, we want them to be all that they can be. But sometimes what we think someone else “should” like or be like has more to do with our own frustrated hopes than that person’s natural bent.

I wonder if this dad would be appalled if he saw some little boys I know happily playing in the giant toy kitchen set up in their home. They know their way around the kitchen, because their dad is an awesome cook who probably could open his own restaurant.

At this same house, I watched the kids at a birthday party recently. Now in this family, there are three kids: a girl and two boys (same as my family). The family will soon grow with the addition of a baby girl this summer (also the same as my family, though my sister didn’t live).

It’s fascinating to me to see to what toys and games children naturally gravitate. Though lightsabers and Nerf guns abounded in this house for anyone to use, the girls at the party chose to play quietly in a bedroom away from the raucous lightsaber/Nerf gun battle in which the boys participated. Every once in awhile, the girls would emerge from the room with a doll or doll blanket. (All of these girls were under the age of eight.) But they refused to join the battle.

Yet when I babysat the children of the host family, all of the kids participated in a game I introduced to them that I used to play with my brothers. We called it Houseboat. The couch was the houseboat. The floor represented the shark-infested waters. The object was to dive for pearls or other treasure and make it back onto the houseboat without being attacked by sharks. The lookout (usually me) would call out, “Sharks!” Everyone would have to get out of the “water” and back to the houseboat. There were always some casualties. 🙂

It’s fun to watch kids be kids whether they pick up a doll or a lightsaber. (And I’ve picked up both.) They can be all they can be as long as they know there is no shame in what they choose.

By the way, a girl at church who has been the beneficiary of some of my Shopkins mentioned that her brother wanted some of them too. Just sayin’.