Having watched the one zillionth romance movie on the Hallmark Channel the other day, I thought about fairy tales. After all, with plots like (1) an office worker bee gaining a promotion to vice president of her company after pitching her great idea to the right person (yet while failing to notice the scrumptious guy in her office who has a major crush on her); (2) a woman winding up married to a famous actor (who turns out to be wonderfully grounded) after she gets drunk one night; or (3) a woman whose adorable son is dying to match her up with his hot soldier pen pal, you’re looking at the modern equivalent of a fairy tale. Yep. Sounds like Once Upon a Time all right. And I don’t mean the Once Upon a Time show based on fairy tales.

I’m not going to get all Bruno Bettelheim on you with an in-depth study of fairy tales, so congratulate yourself on dodging that bullet. (Bettelheim, a noted child psychologist, wrote a seminal work on fairy tales. Read it awhile ago.) I’ve said it before on this blog that I grew up reading fairy tales. So I naturally gravitate to stories with a fairy tale bent. But lately, with friends and family members going through tough times, and finding myself in the same boat, I crave fairy tales even more.

Some might see this longing as escapism. I can see the point. Maybe you can too when the bottom drops out of your life or when trust is broken in some way. At those times, life is more of a horror story than a fairy tale.

Speaking of trust, I recently saw Captain America: The Winter Soldier. Some view superhero movies as the modern equivalent of fairy tales, since fairy tales encompass more than just stories about fairies. But this movie was hardly a fairy tale. The theme of trust was hammered home throughout the film. I won’t give any spoilers, so you can stop cringing. If you’ve seen the movie (I recommend it), you’ll agree. Maybe you’ll also agree that there’s something appealing about a guy who just wants to do the right thing. (I won’t say who that is, so you can stop glaring at me since technically this is not a spoiler.) 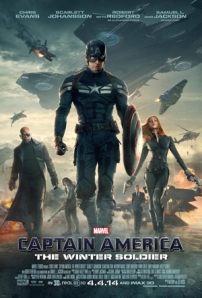 Yet when my friend and I left the theater, still discussing how much we liked the movie and how hot Chris Evans (Steve Rogers/Captain America) and Anthony Mackie (Sam Wilson in the film) are (and my goodness, they are), I still felt a bit somber as I thought about the issue of trust. But my mood had more to do with the breaking of trust which happened recently in a family I know. Since they’re close friends of mine, I hurt because they do.

So, yeah, I think about fairy tales. Sure, some of them seem contrived or formulaic. But it’s nice to know that some stories have a happy ending. And on a hard day, maybe reading a fairy tale is just what the doctor ordered.

I found a quote at this site, which expresses how I feel. Fairy tales

awaken our regard for the miraculous condition of life & to evoke profound feelings of awe and respect for life as a miraculous process, which can be altered and changed to compensate for the lack of power, wealth, and pleasure that most people experience.

The quote comes from a book I haven’t yet read, which was edited by Jack Zipes. (See reference below.) I can relate to feeling powerless in certain situations.

Fairy tales remind us that life can be better. In fairy tales, good triumphs and evil is vanquished. Peasant maids are found by wandering princes. Younger sons who are belittled by villanous older brothers wind up vindicated and worthy of the hands of princesses. Sad circumstances are overturned. J. R. R. Tolkien developed a term for the latter: eucatastrophe, which means “the sudden turn of events at the end of a story which ensures that the protagonist does not meet some terrible, impending, and very plausible doom” (Wikipedia).

I don’t know about you, but I could use a little eucatastrophe in my life. It doesn’t have to wait till the end of my story though. In the meantime, I’ll read fairy tales or watch them unfold on the screen. Like chocolate, sometimes I just need ’em.