Hope you had a splendid Easter. I had an Easter meal at the home of some friends and came away with a ton of leftovers, including the Peeps in the photo below that my friend Carrie decorated. I’m useless at this type of thing by the way. 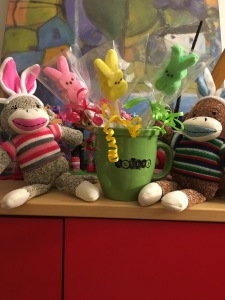 Before church, I watched a behind-the-scenes video by a music artist I love, which was about the making of a video for one of the songs on her latest album. During this video, she talked about how she was finally at a point where she was no longer desperate to please people. She didn’t say that as if to imply that she no longer cared if anyone bought her music. The songs she’d written for the album came from a place of confidence and joy, because she was finally free to be who she was.

Kirstea feels free to be who she is. But she hopes she won’t become a free meal for the giant owl standing near her.

I love that sense of coming to a place where you create the way you want to create. Yes, there are risks involved. You put your stuff out there and people might hate it. Or they might love your vision.

That video came at an interesting time. I’d recently had a conversation with a grad school classmate who asked me if I felt pressured to write a certain kind of story (i.e., contemporary realistic issue-based or something based on the mythology of my culture). Please do not misunderstand me. I love both kinds of stories. I’ve actually had a contemporary realistic novella published under a different name. But honestly, I gravitate to fantasy stories based on the mythology to which I am most familiar. I told my classmate that I don’t like to be pigeonholed. I write the stories based on characters who deeply interest me, regardless of whether they look like me or not.

I seldom lean in the direction that well-meaning people steer me. In college when people told me I needed to major in something “useful” (like biology, poli sci, or physics) rather than continue in the writing program (part of the English department), I continued in the writing program. Though they didn’t see the “use” of such a program, I found it very useful when I had to write books.

To be fair, under contract I’ve written books that other people had suggested I write based on a need (like a picture book for an ESL program). Some were ghostwritten, others as work for hire under my name. (L. Marie is a pen name, as many of you know.) Pleasing the client (usually a publisher or a famous person contracted by the publisher) was paramount.

But creating a world like Terry Pratchett’s Discworld, J. K. Rowling’s Wizarding World, or Charles Yallowitz’s Windemere has been my desire since I was eight years old. That was back when cuneiform was all the rage. I’m very influenced by writers like J. R. R. Tolkien, C. S. Lewis, Sheila Turnage, Juliet Marillier, Robin McKinley, N. K. Jemison, Neil Gaiman, Gail Carson Levine, Shannon Hale, Holly Black, and many others.

Still, I know several people who would never willingly read a story I’ve written because they don’t like fantasy stories. It would please them greatly if I returned to contemporary realistic fiction. I won’t say never, if a character comes my way whose story is compelling to me. But I won’t say yes just to please someone.

How about you? Is the freedom to create what you want to create something you desire? What do you think about pleasing others? Is that good, bad, or something you’re indifferent to? Feel free to share. (If you are curious about the video I mentioned earlier, you can find it here.)

Having escaped from the owl, Kirstea has resumed being free to be who she is. But now she wishes she was tall enough to carry off one of the Peeps.