“Oh the weather outside is frightful,” as the song goes. I’m staring out at snow falling in a rather sheepish way. No pun intended ’cause snow and sheep are both white. I mean the snow is kind of light and noncommittal. Like, “Eh, I’m falling, ’cause it be like that. But I may not stay.” The determined, take no prisoners snow has yet to arrive. 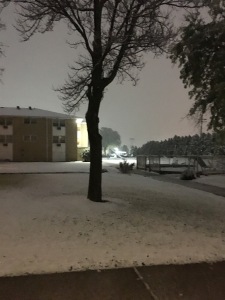 Though I’m irritated by the snow (I want autumn! Go away, winter), Henry, however, is in his element. He wishes every day could be a snow day. He might get his wish, since we’ve had two days of this.

This is a short and sweet post, because I want to get to the main reason why I posted (besides complaining about the autumn snowfall). Before I get to that, let me throw out that I’ve been nominated for a blogger recognition award. There are a bunch of conditions for this award one of which involves acknowledging that I’ve been nominated (done!) and thanking the one who nominated me—FictionFan, which she announced at this post. Thank you, FictionFan!

Another is to tell you how this blog got started. Since this is not the anniversary of my blog, I will give you the simple answer—my younger brother challenged me to start a blog back in 2013. Within a month of that challenge, another guy basically said to me, “If you call yourself a writer, you’ll start a blog.” I took the plunge in February of that year. The results, as you can see. . . .

There are other conditions for this award, which I am skipping over, ’cause it be like that. And now, on to the main point of this post. What more fitting day than a snowy one to announce the winner of the ice cream giveaway, which was announced here. So without further ado, Nancy Hatch, Ben & Jerry’s Non-Dairy Caramel Almond Brittle Ice Cream has been ordered and is on its way to you.

Thank you to all who commented! That’s all for now from the snowy Midwest!

Ben & Jerry’s ice cream image from their website. Other photos by L. Marie.