The other day, my sister-in-law emailed an article to me on young adult movie adaptations, and asked for my opinion. If you’re curious, you can read the article here. In case you don’t feel like doing that, the article discusses the fact that Ascendant, the fourth film in the Divergent series, will debut on TV, rather than in theaters. Why? Because . . .

The humbling of “Ascendant” mirrors the fate of the YA genre as a whole, which has been experiencing diminishing returns in recent years.

In other words, the films have not made as much money in the U.S. as filmmakers would have liked, though they grossed over $700 million worldwide (which is nothing to sneeze at).

So what do I think about this? Well first, I take issue with the phrase YA genre, since YA—young adult—is a market, rather than a genre. There are several genres aimed at that market: science fiction, fantasy, contemporary realism, historical, romance—you name it.

But the article brought up an issue that should have been obvious from the get-go: milking two movie adaptations out of one book. Since the Harry Potter franchise did this to great success, other filmmakers wanted to cash in on that strategy. Note the words cash in. But Harry Potter and the Deathly Hallows is a 784-page book with more than enough material to cover two films. The filmmakers were very faithful to the source material, which was beloved by fans. Note the word beloved. 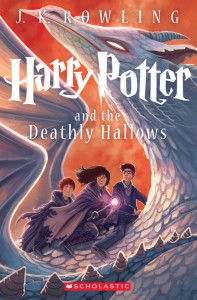 The article brought up the less than stellar success of Part 2 of Mockingjay (a partial adaptation of the third book of the Hunger Games trilogy) and The Divergent Series: Allegiant (a partial adaptation of the third book of the Divergent trilogy). Mockingjay is a 391-page book by Suzanne Collins. Allegiant, written by Veronica Roth, has around 592 pages. Note: All of the page counts are based on the hardback versions, which I read. The fans were divided on Mockingjay. And many disappointed fans took to the internet to rant about Allegiant. So I don’t know why anyone is surprised that fans would be lukewarm about seeing two films adapted from a book they disliked.

But, you say, movies are made to attract new fans. Each movie should be its own animal. Good point. But the article brought up still another issue: the sameness of the movies. If you hear about movie after movie adapted from a dystopian series involving plucky teens fighting back against an oppressive government while falling in love with each other, wouldn’t you think they all sounded the same if you knew nothing about the book series from which they sprang?

I’d hate for movies based on YA books to stop being adapted simply because some have tanked. Perhaps if filmmakers moved beyond choosing only one or two sub-genres to adapt or avoided stretching the plot of one book over two or three movies, they might discover gold.

This has nothing to do with the above, but is it my imagination, or does the trunk of this tree look like the sideview of a woman wearing dress with an empire waist (ala the Regency period) and holding her arms up? 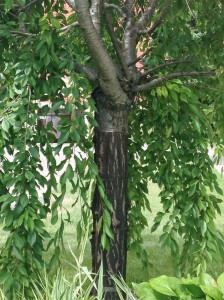