I don’t know about you, but when I was a kid, all you needed to do to make my day was to hand me an inflated balloon. Didn’t matter what color. Just hand me one and I’d be happy. And when it would pop, as inevitably it would since I was the kind of kid who quickly popped balloons or broke things because of my less-than-gentle grasp, I would be devastated. But for those moments of having that balloon, all was right with the world.

What is it about a balloon that brings such joy? The fact that they float? Their roundness when inflated? I dunno, but I’m done trying to analyze the appeal. Let’s just leave chalk them up to fun, okay?

While pondering the issue with balloons, I couldn’t help segueing to the issue of humor in a story. I’ve pondered this issue many times, because I’ve had conversations about the subject over the years. These conversations raised the following questions: Are serious stories more valuable than humorous stories? Is the entertainment factor of a humorous story equal to that of the entertainment value of a balloon—here today and probably popped tomorrow? In other words, not long lasting?

By now, you might be calling for my head for daring to equate humorous writing with balloons. Rest assured—that is not my assessment. As I mentioned in the previous paragraph, I’ve been thinking about the subject. Part of the reason for my pondering comes from conversations in which I’ve heard unfavorable comparisons made between humorous writing and writing of a more serious nature with humor writing deemed as the lower life form. I’ve also been told that you’re not a “real” writer unless you write War and Peace, Antigone, or something else of a serious nature.

I’ve heard similar thoughts uttered about graphic novels and picture books—basically that their brevity of text and higher ratio of pictures (the nature of both types of books) make them entertaining but not as valuable as, say, Ulysses.

I think we all know that such comments are subjective, rather than constructive. Anyone who has ever written a graphic novel or a picture book knows how difficult it is to write a good one. Because of the marriage of text and images, every word has to be chosen carefully.

Same with humor. Don’t believe me? Then read something by Dave Barry, David Sedaris, or Tina Fey. 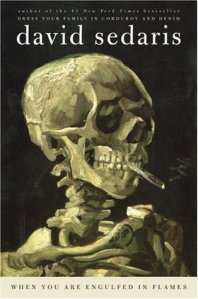 I’ve had bouts of depression over the years. At those times, I often turned to books written by this guy: 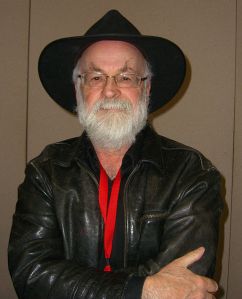 At those times, books with a somber tone would have gone over like the proverbial lead balloon. Even when the cloud lifted, I turned to Terry’s books. Many have a gorgeous combination of humor and pathos—not an easy combination to get right.

Don’t get me wrong. I love a good tragedy. Macbeth is one of my favorites. And I’m totally loving Babylon 5, a series created by J. Michael Straczynski that I somehow missed in the 90s and can now see, thanks to Netflix. It has a wonderful combination of humor and agonizing tragedy. Season 2 is heartbreaking!

I’m reminded of this passage from Ecclesiastes:

Sometimes a heartbreaking story or angsty poetry “speaks” to me. Other times, a laugh-out-loud-funny book is just what I need. So I can’t value one over the other, because they both meet a need at a particular time.

Getting back to the balloon, there’s a time for them too. While recovering from an illness or surgery over the years, nothing heartened me more than a cheerful balloon floating above my bed. There are some things, you never let go of. Balloons are one of those joys I never outgrew.

If you like John Cleese, click here for a great video on laughter. (And no, it’s not a Monty Python video. Sorry.)

A funny thing happened on the way to the blog today—if you recognize that well-known setup to a joke, you’ll have an idea of the subject of today’s discussion: humor in writing. With me today and tomorrow is the awesome and splendiferous Shelby Rosiak, whose blog My Year with The Mouse just might be your cup of tea.

If you haven’t visited Shelby’s blog, click on the blog name above, and witness Shelby valiant visiting many wonderful places at Disneyland and reporting on them, thereby making us wish we were her. Alas, MYWTM is on a hiatus now while Shelby gathers her wits and tries to find at least two shoes that match.

Give yourself a gold star if you can guess where I met Shelby. CoughcoughVCFAcoughcough. Now grab your rubber chicken, bonk yourself over the head, and join us!***

El Space: Let’s start with four quick facts about yourself, for those who haven’t sat in Noble Lounge on campus reading books about Scaredy Squirrel with you like I have.
Shelby: (1) When I was thirteen years old, I was on a TV game show. I lost, but got a VCR as a “parting gift.” (2) I have been to twelve countries including China, where my family adopted our now two-year-old daughter, Violet. Our four-year-old son Theo came with us—it was a real adventure. (3) I live near Disneyland and can see the fireworks from my back porch. It’s pretty much awesome, because who DOESN’T want to see Disneyland fireworks from their back porch? (4) I used to be a technical writer for the world’s largest computer company. I much prefer creative writing.

El Space: Love the Disneyland fireworks! And I’m glad you love creative writing, since that brought you to that place I coughed about earlier. Who are the authors who most influence you?

Shelby: I think influence is a funny word because, to me, it implies that I’ve changed my work based on their writing. I can’t think of anyone like that, but I have been inspired by a number of amazing writers. I cried when I met Judy Blume [left]. I’m not kidding. She must have thought I was a total whackadoodle, but she was so sweet and gracious about it. As a young person, I was very inspired by writers who wrote strong female characters—Cynthia Voigt, Katherine Paterson, Jean Craighead George, Scott O’Dell. And you didn’t ask this question, but the three authors I wish I’d had a chance to meet before they died? Madeleine L’Engle, Maurice Sendak, and Roald Dahl.

El Space: I wish I could have met them as well. Now, everyone who knows you knows you’re hilarious. In a recent PBS interview with Jeffrey Brown, Dave Barry, considered one of the funniest writers in America, said this:

[W]hen I’m writing columns, it’s—all I’m thinking about is jokes, joke, joke, joke, setup, punch line, joke, joke, joke. And I really don’t care where it goes. I don’t have a point the [sic] make. . . . With a novel, you have to have a story. It’s much more important to have it matter to the reader what happens to people, and it has to make sense and end in a way that is satisfying.

What are your thoughts on humor and your writing? How do you make it satisfying as Dave Barry suggested?
Shelby: This is a great quote. Articles, and nowadays blogs, are perfect for short one-liners—off-the-cuff jokes for an easy laugh. Novels present a different challenge, but also a real opportunity for the humor writer, because you can establish something humorous, like an inside joke between the author and the reader, and refer back to it as an ongoing aspect of the novel and it can become funnier and funnier as you go. You can also start building humor with the narrative, with establishing a small joke and growing with it.

Think of the song, “There Was an Old Lady Who Swallowed a Fly.” This old lady swallows a fly—that’s funny, but we also sing “perhaps she’ll die” at the end of each verse. Then the old lady swallows a series of animals, each funnier than the last (a dog? Seriously?). And at the end she swallows a horse, which is funny in and of itself, but then you get the HUGE payoff with “She died, of course.” By building the humor, you get a much bigger payoff than you would with a one-liner. And that kind of payoff in and of itself is very satisfying.

And that’s something that you can do with longer fiction that is more difficult with shorter fiction. I think the big difference is thinking long term in the humor, in addition to one-liners. Making it satisfying means tying it all back to story, because it’s always about story. The humor needs to serve the story, otherwise it doesn’t belong there.

The big drawback of being a humor writer, however, is having to cut funny lines. I’ll write something I think is absolutely hysterical, and my feedback says it has to go because it doesn’t serve the story. It’s hard to cut lines when you think, But that’s hilarious!! But it needs to be done. It always comes back to story. Always.

And we’ve run out of time for today. But tune in tomorrow and we’ll talk more with Shelby about humor. Don’t forget to bring your rubber chicken. In the meantime, if you have questions for Shelby about her process or want to share a tip about humor writing, please do!

***Glad you made it to this footnote. Um, you don’t really have to hit yourself on the head with a rubber chicken, since we’re not talking about the physical humor you see in movies. I just wanted to see if you would do it. 🙂