Before I get into the subject of today’s post, let me just say my thoughts and prayers are with and for those affected by Hurricane Irma. And of course I think about 9/11 so many years ago, when terrorist attacks here in the States changed our world in so many ways.

You know how you’re told to “put away childish things” when you become an adult? That’s good advice, especially when it comes to relating to people. It encourages us to actually talk to people we’re in conflict with, instead of rolling our eyes and sticking our tongues out at them, like we did when we were kids, or making up a song about them and taunting them with it.

Moving on (though you probably have the song “Bad Blood” going through your head), I went against the advice to put childish things away and returned to a childhood pastime—making paper rooms.

Why would you do that? I hear you asking. Well, fiction writing has been difficult for me lately. I freeze up whenever I attempt to put words on a page in any of the stories I’ve been working on. Whenever I ran low on inspiration when I was a kid, I made what I called a chain house. First, I would make furniture by folding notebook paper and taping or gluing it so that it would stand up. Second, I would arrange the furniture of each room to fit on one sheet of paper. When I finished two rooms, I would tape them together in a chain before moving on to the next set of two, until the house was complete. The chain houses could be rolled up and stored away.

But these days, instead of using notebook paper, I use the paper you find in the paper crafting section of Michaels or Jo-Ann. Yeah. The good stuff.

Here’s my first attempt at a living room, bedroom, and kitchen.

This room is my crafter’s room:

When I was a kid, I never revised anything. Stories remained as they were first written. Same with drawings and chain house rooms.

Now that I’m an adult, revision is second nature. Whatever I write, I revise. And now I’ve begun revising the paper rooms. Here is the revision of the bedroom above. Instead of just a generic bedroom, I positioned it as the ultimate girl’s room. I’m picturing a kid who isn’t the neatest kid on earth living in this room and having sleepovers here.

Instead of a generic living room-like space as before, I’m going for a cozy family room in this revision. Obviously, I have a lot more to do in this room to add more character. Like maybe adding more furniture.

What I realized through this paper room exercise is the value of having specific goals for each space, as well as having characters in mind. When I made the first rooms (the living room and bedroom), I didn’t put much thought into the rooms. I just made them, because they were fun to make. But during the revision phase, I realized I needed to have goals for the space, as well as character marks to show what the person or people who occupy that space is/are like.

When I made the crafter’s room, I had a specific person in mind—myself. I don’t really have a craft room like this. This room reflects my crafting style and the tools I often use. But the reason why you don’t see a revised version of this room, is because I knew when I started it what the goal was and who it was for. I’m happy with how it turned out.

Maybe what I learned while making paper rooms will help me when I return to fiction writing. So many times, I’ve leaped into a story without giving much thought to goals and without really knowing the characters I wanted to write about. But now I know I can give more thought to both and have fun during the journey.

Have you returned to an activity you loved when you were a kid? How has this activity helped you in your adult life? 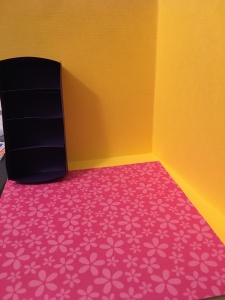 Girl sticking her tongue out image from imgrcade.com. All other photos by L. Marie.