Book fans, I will return to author interviews and book giveaways at some point in the near future. Sorry. I’ve been a bit frazzled lately, and haven’t yet reached out to the many people I know whose books have debuted in recent months. I will though! For now, I’ll continue to unspool my mental floss.

Were you that prescient kind of kid (or adult) who kept your Star Wars, Teenage Mutant Ninja Turtles (the old ones), He-Man, Transformers, or Strawberry Shortcake figures in their original boxes, or your comic books hermetically sealed, knowing that someday you would sell them? If so, good for you! A friend of mine has a Boba Fett action figure from back in the day, still in its original box. (Off to eBay he goes!) 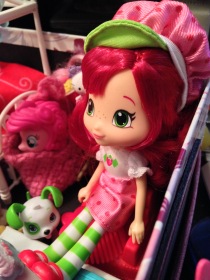 Unfortunately, I was not that kind of kid. And yes, I have had moments of regret about that. 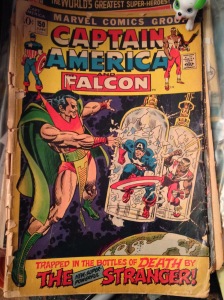 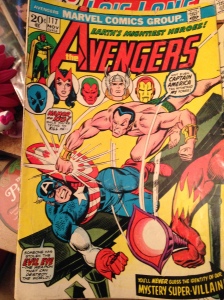 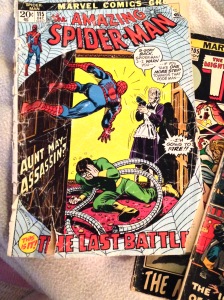 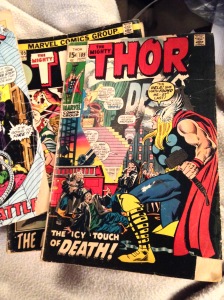 I’m totally dating myself by revealing some of my comic book stash. (All of my Archie comic books and other non-superhero comic books have disappeared for some reason.) But surely you noticed that they’re not in great condition. Some (like the Avengers issue above) are better than others. 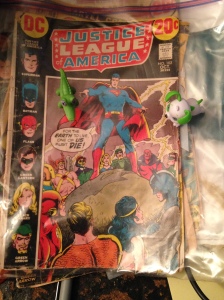 Well, not this one. This represents my sad attempt at preservation many years after purchase.

Take a look at these. I couldn’t even tell you where the cover for the one on the right might be. It also is a Superboy comic book. 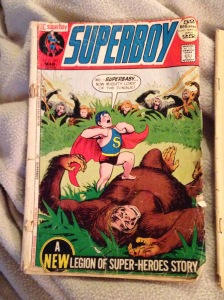 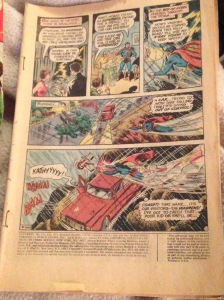 Yes, Superboy, Lois Lane, and Jimmy Olsen comic books existed at one point. And that was back when Lois Lane, the intrepid reporter, was mostly known as Superman’s girlfriend (or girl friend as you can see below), as well as someone constantly in need of a rescue. 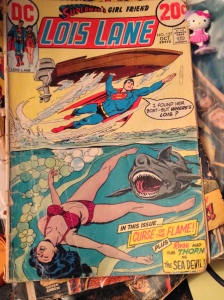 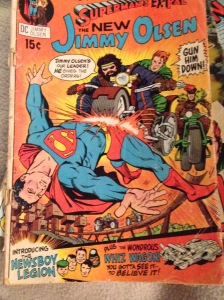 Wait. Not much has changed in that department. 😦 (Now there’s a blog post waiting to be written.) But the point is, I enjoyed reading these comic books back in the day, never once thinking that someday I could sell them. (I used to spend my allowance money on them.) 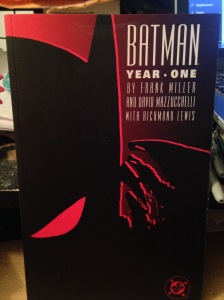 This is old, but it is younger than the others in this post.

I also was not much for taking photos to preserve life’s special moments, though I used to own a good Nikon camera. Unfortunately, I’m no Dorothea Lange or Ansel Adams. Invariably, I would either cut off someone’s head or I would take a “red-eye” photo, where everyone looked like an alien from another galaxy. (Maybe that’s why I write fantasy and sci-fi novels.) 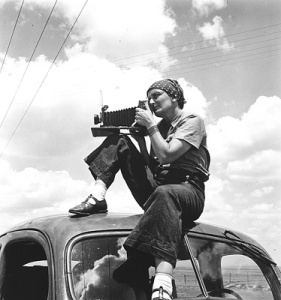 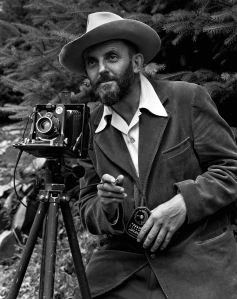 As for other ways of capturing the moments, I was faithful for a short while at preserving my thoughts and angsty poetry in journals. Ha ha. I quit doing that too.

I’m more of a user than a preserver. That sounds negative, doesn’t it? In a different context, it would. But you see, I played with the toys that were given to me. Like this tiger I’ve had since I was eleven years old. 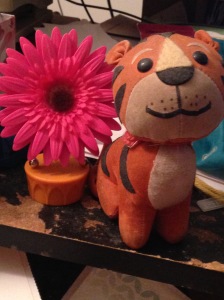 I enjoyed reading comic books in the backyard with my bare feet on warm green grass, while occasionally admiring the fleecy clouds swirl by overhead. Sounds like a photo op, right? But those pictures are memories in my head, rather than in a scrapbook.

I take more photos now than I used to, mainly because of this blog. But when I’m outside enjoying a silky breeze or watching the war between the robins and grackles for supremacy in the yard, sometimes I forget to capture the moment on my phone. Rest assured, though. Those moments are preserved where they need to be—in my heart.

What about you? User or preserver? 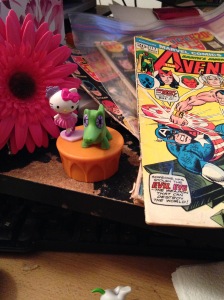 An example of the kind of photo I take. Note the toy dog’s butt sticking up at the bottom of the photo. This is Pupcake, Strawberry Shortcake’s dog. Not his best side.

Greetings one and all. With me on the blog today is one of the four awesome advisors who guided me while I was a student at VCFA. Please join me in welcoming the amazing Elizabeth Partridge. Welcome, Elizabeth!

Elizabeth is an award-winning author of fiction and nonfiction books, including Marching for Freedom; John Lennon: All I Want Is the Truth; Dogtag Summer; This Land Was Made for You and Me: The Life and Songs of Woody Guthrie; and Big Cat Pepper—just to name a few. Cool, huh? And if you’re wondering which awards she won, here’s a handy list: National Book Award Finalist, Boston Globe-Horn Book Award, Los Angeles Times Book Prize, Michael L. Printz Honor, SCBWI Golden Kite Award, SLJ’s Battle of the Books, and the Jane Addams Children’s Book Award. 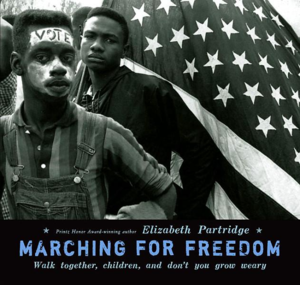 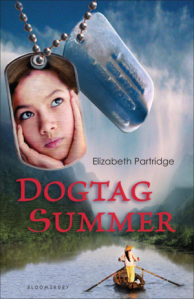 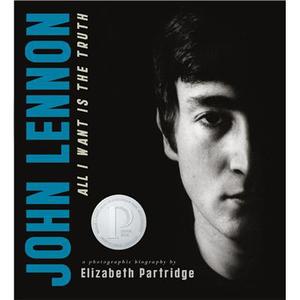 Impressive, huh? Elizabeth is represented by Steven Malk at Writers House. She’s here today to talk about her latest nonfiction book, Dorothea Lange: Grab a Hunk of Lightning (Chronicle Books), which debuted last month. Even if Dorothea’s name doesn’t sound familiar, I’m betting her work is. Recognize the photo at the right? This photo, “Migrant Mother 1936,” is one of the most memorable images of the twentieth century. According to Amazon, this book “is the only career-spanning monograph of this major photographer’s oeuvre in print, and features images ranging from her iconic Depression-era photograph ‘Migrant Mother’ to lesser-known images from her global travels later in life.” One of you will win a copy of this book. But let’s talk to Elizabeth first! 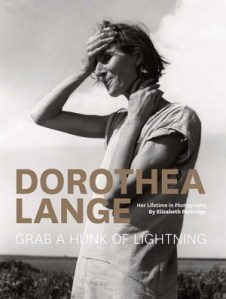 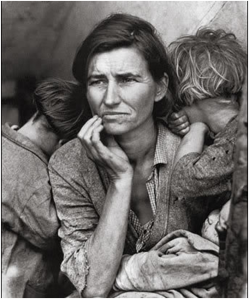 El Space: Four quick facts about yourself?
Elizabeth: 1. I write nonfiction and fiction for kids and young adults, and nonfiction for adults (so far).
2. I live in the house I grew up in. It’s a big, huge Berkeley house.
3. I live with my 96-year-old dad, my husband, our son, his fiancée, dogs, cats, and chickens.
4. I was an acupuncturist for more than twenty years.

El Space: Cool! Now, this isn’t your first book on Dorothea Lange. How did this new project come about? Where did the title—Grab a Hunk of Lightning—come from?
Elizabeth: Dorothea Lange was my godmother. My father, Rondal Partridge, knew he wanted to be a photographer when he was a teenager, and his mother, Imogen Cunningham, sent him to work with a couple photographers she called “family friends.” Ron worked with Ansel Adams for a while in Yosemite, and then went to work for Dorothea. He packed her camera bags, drove her around the backroads of California, developed her negatives, printed her prints, etc. Gradually he was folded into the family, and we all grew up with her. She was the undisputed matriarch of our family, and had more influence on me creatively and politically than anyone else. 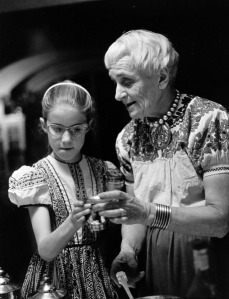 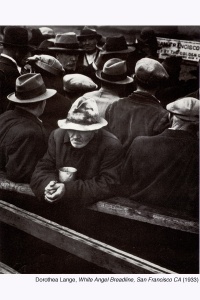 The title of the book, Dorothea Lange: Grab a Hunk of Lightning, comes from something Dorothea said. She was a portrait photographer in San Francisco when the Great Depression hit. One day she was looking out her second floor studio window and saw an unemployed man below come to the corner and pause. He didn’t know which way to go. She decided she better make something happen. So she went out with her camera and took a few photographs. She went back to her studio, developed and printed the images, and put one up on the wall. She said she did it to see if she could “just grab a hunk of lightning.” The photo, “White Angel Breadline,” became one of her best known images.

Dorothea’s granddaugher, Dyanna Taylor, is making a film by the same title. It will air on PBS’s American Masters in the fall of 2014. Dyanna is one of my lifelong best friends, and it has been a blast working on this project together.

El Space: What was the most challenging aspect of working on this book? How long was the process from start to finish?
Elizabeth: Challenging? Hmm. Probably the schedule. Books take a long time once they are turned in to the publisher before they are in the bookstores. We were really burning the midnight oil on this one. I think I did the whole thing in about 10 or 11 months. The fun challenge was to put images in the book that had never been seen before. Between never and rarely seen, I think I got about 15 or 16 images in.

El Space: Some nonfiction books have come under fire over the years because the authors were less than factual. What tip(s) do you have for ensuring accuracy in nonfiction?
Elizabeth: I’m a stickler for Telling the Truth. Get it right. The best way to do this is to track back to primary source documents.

El Space: You’ve written a number of biographies. Is there a dream biography you’d like to write? If so, whose?
Elizabeth: A dream biography. . . . Yep, I do have one in mind. But it is still a secret until I see if there is enough material for me to do it. Hint: the most dramatic and important and heartbreaking part takes place in WWII. 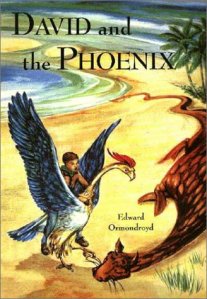 El Space: What book, if any, inspired you as a child or teen?
Elizabeth: I could have been a poster child for a bookworm. I used to walk to the library on Friday and pick up a stack of books to read. I was pretty omnivorous. I loved those biographies that now we know are all made up . . . a whole series of important people. They had blue or orange covers, depending on when you read them . . . first or second printing I suppose. For some reason lately, I’ve been thinking about one of my all time childhood favorites: David and the Phoenix [by Edward Ormondroyd]. It made me feel the world was alive with all kinds of magical creatures, all kinds of possibilities and adventures. It also was one of those stunning moments after I read it when I read the back flap and realized . . . real people write books.

El Space: What are you working on now?
Elizabeth: Right now I’m working on a book on the Vietnam Veterans Memorial in Washington DC. I’m interviewing vets who came back. Through their stories I want to tell the stories of those whose names are on the wall: the men and women who didn’t come back. It’s an honor to do these interviews.

Thanks, Elizabeth, for being my guest! Interviewing you has been an honor for me!

One of you will win this beautiful book for your collection. Just comment below. Winner to be announced on Thursday, December 19.