Worth It is a show I’ve binge-watched lately on the Buzz Feed YouTube channel. Have you seen it? Its stars, Steven Lim and Andrew Ilnyckyj, and their camera and sound guy, Adam, sample three foods or beverages at three different prices to determine which is worth the money.

Below are screenshots of two of the items sampled. One is a $2000 pizza with edible gold leaf (yes, $2000; you can see the ingredients list on the photo) and the other is a $2500 caviar soufflé with quail eggs (a Guinness World Record holder for the most expensive soufflé on earth). 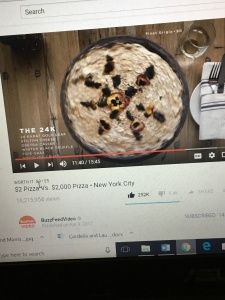 While the show hosts sampled the wares, I asked myself if I would ever eat gold leaf, even if I had the money. (Another episode, which you can find here, features a $100 donut with gold leaf.) The answer was a resounding no. This is not a judgment call on anyone who would, however.

But a day later, I found myself salivating over a pair of cars Nicki showed on her Behind the Story blog recently. If you head over there, you’ll find a video showcasing the Alfa Romeo Stelvio and Giulia and their precision on ice. Or just click here. Each is over $40,000! But when you live in the frozen Midwest, any car that handles that well on ice (you have to see the video) gets your attention.

How about you? Are there big-ticket items you dream about, but don’t think you’ll buy? Would you treat yourself if you could?

These Shopkins Cutie cars want to do the Stelvio/Guilia ice challenge. Somehow I doubt they’d avoid crashing into each other.

Alfa Romeo Stelvio from caradvice.com.au. Other photos by L. Marie. Shopkins Cutie Cars are a registered trademark of Moose Toys.