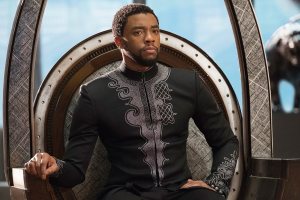 Dictionary.com has this definition of kingly:

stately or splendid, as resembling, suggesting, or befitting a king; regal

Not that you needed that term defined. I looked it up, because I thought of the preconceived ideas many of us have about how kings/queens or other significant leaders should look and act—what we think “befit[s] a king.”

When you think of a king/queen (fictional or nonfictional), do any of the following adjectives come to mind?

They do in my head. T’Challa of Wakanda (Boseman’s character, the 1966 creation of Stan Lee and Jack Kirby) fits all of the above. But he is a fictional king. So why, I asked myself, do I have the idea that a person with a “kingly bearing” fits those adjectives (or at least most of those)? Probably because of Saul, Israel’s first king. Check out this description, which I found in 1 Samuel 9 (in the Bible):

There was a man of Benjamin whose name was Kish, the son of Abiel, son of Zeror, son of Becorath, son of Aphiah, a Benjaminite, a man of wealth. And he had a son whose name was Saul, a handsome young man. There was not a man among the people of Israel more handsome than he. From his shoulders upward he was taller than any of the people (vv. 1-2, ESV).

A month ago, I watched a 2006 PBS documentary on Marie Antoinette, written and directed by David Grubin. Marie Antoinette, as you know, was married to Louis XVI of France. But the historians interviewed in the film probably would not have used most of the adjectives in the list above above to describe Louis XVI. Biography.com had this to say about him: “He was introverted, shy and indecisive, a lover of solitary pleasures such as reading and metalwork.”

There are many other kings in history who don’t fit the mold either. I’m sure you can think of several whose tyranny or abdication of leadership to more forceful individuals made them a blight on history. But whenever I inject a king or a leader equivalent to a king into a fictional story, I have the image of a Saul or a T’Challa. (And yes I know that Saul was not considered an ideal king. But he had that “kingly bearing.”)

Watching the movie and thinking about my views on “kingly bearing” made me realize that I need to go beyond preconceived ideas when I create characters. It’s not enough to have a character “look the part” (i.e., merely having traits borrowed from other similar characters), which can make that person seem cliché. He or she needs to be fully realized—warts and all.

Kitty knows that she has the look of a leader. Don’t let the cupcake fool you.