I debated about whether or not to post at all in such a time as the one in which we find ourselves. But when I thought about this illustration, I had to post.

You may wonder what this is all about. Mel Blanc provided the voice of many, many Looney Tunes and Hanna-Barbera cartoon characters (Elmer Fudd, Yosemite Sam, etc.). Consequently, he was known as the man of a thousand voices. After his passing, this illustration was done as a tribute. The title was perfectly chosen. And it describes how I feel these days. Maybe you feel the same. I would add outraged, full of grief, sad, overwhelmed, and struggling to the mix as well in the wake of recent events. Yet in these speechless days, I take comfort in these words:

The Spirit of the Sovereign LORD is on me . . . to comfort all who mourn, and provide for those who grieve in Zion—to bestow on them a crown of beauty instead of ashes, the oil of joy instead of mourning, and a garment of praise instead of a spirit of despair. Isaiah 61:1-3

Are you on Pinterest? Once again a family member—this time my sister-in-law—had talked me into branching out on social media. Which led me to Pinterest.

For almost a year, I had a Pinterest board that I ignored. I didn’t quite get why I should use Pinterest. It seemed too simplistic. It also reminded me too much of scrapbooking—something at which I failed miserably. I still have a drawer full of photos I never placed in photo albums. So as a novice pinner, I didn’t have a plan. I repinned six photos culled from the ones sent by Pinterest because they looked interesting and had a vague connection to my high fantasy novel. I ran out of motivation after that.

Over the months, strangers from around the world repinned the same photo of dyed sheep from my board (see below). Pinterest kept emailing notifications like a persistent wooer. I wanted to say, “Shoo!” and close down my account despite the fact that some of the strangers began to follow that board.

I was content to keep ignoring my board until a blogger I know wrote a post on how she used her Pinterest boards as inspiration for her book. That gave me an idea: perhaps I could do the same. But she had several boards. I didn’t understand why anyone would have more than one.

I had switched to a different WIP by that point and was stuck on how to proceed with it. Usually when I’m stuck on a project, I switch to another creative outlet: drawing, making 3D models out of paper, or crocheting—something visual and tactile. But this time, I turned to Pinterest. I had named my inaugural board Inspiration. Now I needed to be inspired.

When I was a kid, Pinterest was a notebook, some tape or glue, scissors, and a bunch of magazines out of which I cut pictures. In other words, Pinterest didn’t exist except through my physical labor. But as I think about the hours I spent cutting out magazine photos, I remember how inspired I was by the photos I found—inspired enough to hunt them down, display them in a notebook, and then write stories based on those pictures.

After figuring out how to search for photos on my computer, Pinterest, or elsewhere online, I added to the Inspiration board, then started a different one—More Inspiration. (It was either that title, Inspiration 2, or Inspiration the Sequel. Do you see why Hollywood never hired me to title films?) I repinned eye-catching photos that made me feel something: joyful, nostalgic, or just plain awed. But I had added so many different categories of items on one board—animals, plants, etc. I was ready for a third board—Animals in My Books. That board led to a fourth—Plants and Trees in My Books. Are you sensing a pattern here?

So, what’s the deal with Pinterest? I would answer that question this way: it’s fun and easy to do. Adding photos to various boards gave my brain something it needed—visual reminders of possibilities.

Today I have 19 boards. And that novel I wasn’t sure about? I finished a draft that I’m now revising. While I didn’t value Pinterest at first, I’m glad I tried it. Sometimes the simplest tasks can lead to great breakthroughs in other places.

If you’re in the habit of watching the behind-the-scenes features of animated movies, TV shows, or special effects-laden movies like The Hobbit (I’m obsessed with those features), then you’ve probably seen the preproduction team discussing how they storyboarded the film/TV show or a visual effects sequence. The storyboards helped them plan each shot of the movie or show. Taking the time to storyboard also helped the team to gauge where problems might arise.

Storyboarding is not just for animators. Many novelists and picture book writers use storyboarding or some variation of it as well. During my grad program, some of the faculty encouraged us students to use this technique to plan scenes in our novels or picture books.

Sometimes, when I’m stuck in the middle of a scene or having trouble transferring what I see in my mind to the page, I grab a pack of Post-it notes and a pencil. Starting with the first image that comes to mind, even if it’s vague, I work through the scene as if I’m planning a mini-movie.

Below is one of my attempts at storyboarding an action scene in a forest. Okay, I know what you’re thinking. These sketches make no sense. Maybe to you they seem like squiggly lines and cryptic phrases, rather than a tense action sequence. Yet when I started slapping notes on the board—even sketchy ones—the sequence order became clear. I already knew the inciting incident in the scene. I just needed to know what would happen next, and then after that, and after that, and so on. The good thing is, I don’t have to pretend to be Picasso as I storyboard. 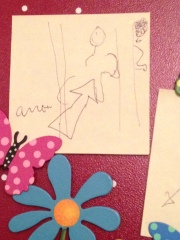 How do you plan your scenes? If you have Scrivener, perhaps you use the corkboard to storyboard or outline. Or, maybe you get out the sketch pad and draw until the words come, or you use Pinterest to pin photos that inspire you. (Or Instagram, like Lyn Miller-Lachmann does with her graphic novel.) Perhaps there’s another way inspiration hits. Maybe a music playlist helps you set the scene. Or, a brisk walk or a run might be your way of working out issues. Nature is your canvas. You rearrange scenes based on what you see outside or how your body feels. Life is your storyboard.

I don’t know about you, but when I’m stressed about a scene, drawing brings me back to a restful state. It also takes me back to childhood, when drawing was a form of problem solving or escaping from problems. Sadly, like many other things, I stopped doing it regularly as I grew older. I regret that now. 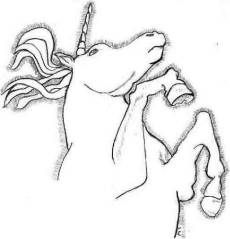 But like a good friend, I can return to it when I need to work things out.

Sometimes a picture truly is worth a thousand words. If you need a storyboard template check this out: