So, Thanksgiving was not the way I’d planned it. The signs of its unusualness started on Monday with sinus pain that worsened by Tuesday. The trip to my sister-in-law’s parents’ home that I had been looking forward to was starting to look like it wouldn’t happen. I made the call most of us dread—to get a doctor’s appointment, only to discover the only available one was 11 days away.

I can tough this out, I thought. Ha. A few nights with little sleep thanks to pain caused me to ditch that plan and head to the ER on Friday, after a turkey-less Thanksgiving spent at home. Now, one does not head to the emergency room lightly. You have to come prepared. I brought a book, my Nintendo Switch, and a writing pad. Hmm. Which one would I choose? If you answered none of the above, you would be right. I sat there instead, trying to sleep, just wanting the pain to stop.

Now picture in your mind the sound of a record scratch. If you were born after a certain year, you might not know what that sounds like. Go here to hear it. A record scratch, according to Merriam-Webster is “something that abruptly calls attention to surprise or change.”

There I was, feeling sorry for myself when a woman arrived with an infant carrier. When asked the baby’s age, the mom replied, “Four months. She tested positive.” And then I heard the most chilling sound I think I’ve ever heard in my life: an infant wheezing—a tiny, gut-wrenching sound.

More sick children were carried in. Sick adults came too, some in wheelchairs. I was surprised at the amount of lower back pain people were experiencing. Some had had a fall, which left one woman concussed.

All of us waited for hours to see a doctor. I heard a nurse tell someone that the estimated wait time was two hours. A low estimate, I later discovered. Another nurse announced a stroke alert after a man came in with numb fingers. A woman came in with chest pain. The patient shuffling began with high-risk patients like these.

After four hours I saw a doctor for probably less than five minutes. His pronouncement—dental abscess—was met with prescriptions for a high-powered antibiotic, a probiotic, a high-powered pain pill, and a lesser potent one. 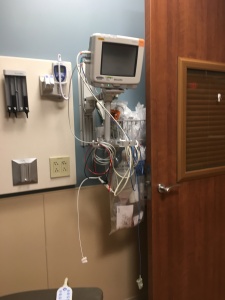 But though I came for what I needed, I was left with something more: a remembrance of that baby wheezing, a tiny note of fear and helplessness that caused me to pray and think of someone besides myself.

Quite a contrast to the last post. The autumn-to-winter juxtaposition of the posts was not deliberate, however. I didn’t post last week because I couldn’t think of a topic. And I didn’t know about the snow until last Saturday when my younger brother announced its scheduled arrival on Tuesday (the day I wrote this). Sure enough, overnight, it came. The Grinch couldn’t stop it like he couldn’t stop Christmas from coming. I admit to feeling a tiny bit grinchy when I saw it though. So yes, Ally, I feel the pain expressed in this blog post.

Still, days like this, I’m reminded of the classic book by Ezra Jack Keats, The Snowy Day, which Amazon adapted for the screen. As I gaze at the snow-laden branches through my balcony window, I feel the fire of joy trying to melt my cold heart, encouraging me to appreciate the subtle beauty of winter as fall leaves are replaced by white lace.

A mug of hot chocolate is in order! 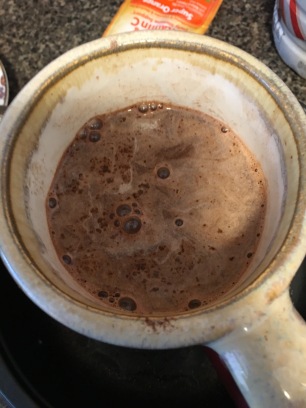 The Snowy Day cover from Goodreads. Other photos by L. Marie.

On Halloween, as I accompanied the trick-or-treating kids of some friends, I couldn’t help noticing the beauty of autumn. The vivid colors of the leaves, late afternoon clouds, and vivacious shrubs seemed more sharply delineated. 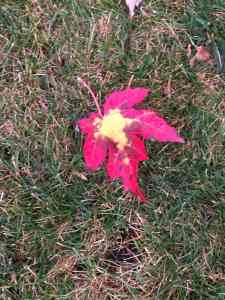 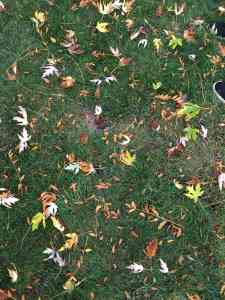 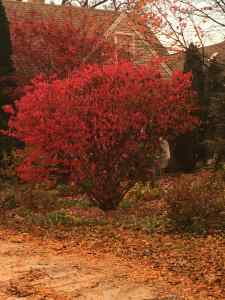 The 60-degree Fahrenheit/15-degree Celsius temperature lured many outside to huddle near firepits, with bowls of candy on tables for trick-or-treaters. It was a lovely day to be outside, watching groups of eager children running from house to house. A change from years past when snow or cold rain made the experience less than fun.

I didn’t solicit candy, though I was given some regardless. Yet I received much more: the evidence of autumn beauty.

Though the temperature downshifted later in the evening, a lovely fog rolled in.

A perfect ending to the day.

How was your day?

Fall photos by L. Marie. Photo of the fog by Ben Pyykkonen.