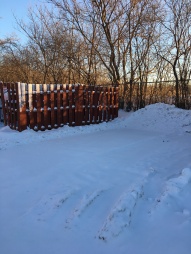 Don’t let the sunshine fool you. I took these photos while standing outside in -7 degrees Fahrenheit/-21 Celsius air (-25F/-31C wind chill at the time). Lest you wonder why, I was on my way to start my car. When your car is old and you’re parked outside in weather like this, you need to start it every day, even if you don’t go anywhere.

The car gave me attitude, acting like it didn’t want to start (I have a sudden flashback to my teenage years and how I was in the morning), but I was determined that it would start.

The next day, the temperature was a balmy 14 degrees to allow for more snow. Wheeeee!

On the day that I’m writing this, earlier I crunched outside (snow crunches, in case you are wondering about my verb choice) to start the car and to brush the powdery snow off so that I could head to the store, since we’re expecting—you’ll never guess what—more snow.

At the time (6:48 a.m.) the temperature was one above zero. A thirty-two-degree day seems almost tropical. I can’t remember the last time we had one. Maybe the week before last? Three weeks ago?

It’s amazing what you get used to. I’m now used to the rhythm of going outside, armed with my tools, just to be able to move my car. 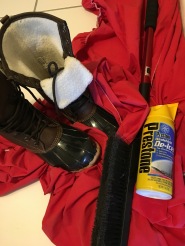 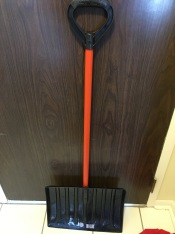 The shovel is the MVP. Not shown is the windshield screen a pastor gave me out of pity.

I can’t help thinking of the line spoken by Richard in Richard III, Act I, Scene I—the first line in the play in fact:

Now is the winter of our discontent.

But you have to read the next line to get more context:

Made glorious summer by this sun of York

Okay, maybe that line doesn’t provide a ton of context. It is interesting how Richard is being sarcastic here as he contemplates his misery during a supposedly happy time, thanks to his brother becoming King Edward IV. This is not a post on Richard III, so I won’t go into the why of this, though you could check out David Morrissey performing the soliloquy from which the above line derives. (If for some reason the video below disappears, click here to view it.)

But the contrast of happy days (summer) to dark days of war epitomized by winter was too apt for me to ignore. And yet . . .

I have to let the temptation of yearning for summer, or even spring, pass. It’s so easy for me to long for what’s to come (warmer temperatures), instead of living in the now (the freezer).

After all, freshly fallen snow enabled me to spot these: 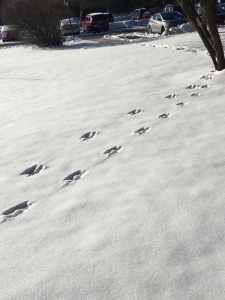 Coyote tracks from a couple weeks back; the pack has taken shelter somewhere else lately.

I’ve also gotten to know several neighbors simply because we were all out shoveling snow around our cars.

This is winter. This is now. And yes, that wreath hangs on my door.

When the snow photo above was taken, the temperature had climbed to 16 degrees Fahrenheit /-8 Celsius. Good job, Winter! I knew you had it in you.