I was thinking today of how I miss the days of neighbors being neighbors, instead of human fence posts divided over a vote (or a nonvote).

I’m tired of the line that says, “Do not cross unless you agree.” Tired of sides. Tired of suspicious looks or decisions to keep a war going without thought of the cost. Because war always has a cost. If you don’t believe that, take a gander at all of the crosses at the Normandy American Cemetery and Memorial.

I remember, back in 2005, when Hurricane Rita hit Texas, where my parents live. Their neighborhood (outside of Houston) was without electricity for over a week. Since many had electric stoves, they were forced to cook on a grill. Neighbors cooked for other neighbors, gladly sharing what they had.

In geometry we’re told that a line is the shortest distance between two points (though some dispute the type of line). Maybe we could draw a line of connection between each other instead of a line that separates. 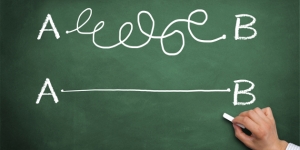