Hope you had a wonderful Mother’s Day. I wasn’t able to be with my mom (except by phone), but I enjoyed being with my in-laws. 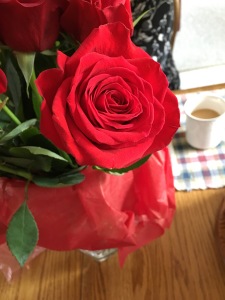 This might seem like an odd post-Mother’s Day post, but here goes. (I never said I was normal. And I’m in between interview posts, so . . .) An article in Entertainment Weekly, “To Cap It Off,” discussed the “sarcasm-free wholesomeness” of the Marvel character Captain America. In the quote below, article writer Anthony Breznican quotes Chris Evans, the actor who plays Captain America (don’t worry, no Endgame spoilers):

Even the actor’s friends didn’t get it when he tried to explain Cap to them; one asked if he was supposed to be “boring.” Evans sighed. “If it comes out boring, I’ve really missed the mark. He’s not boring. He’s real.” (29)

I absolutely love love love (did I mention I love it?) that sentiment. Wanna know why? Even if the answer is no, I’ll tell you. It makes me sad that some people think a hero is “boring” if he or she isn’t out-snarking everyone or shooting first (looking at you, Han Solo). Look, I love a good quip, which is why Spider-Man is one of my favorite superheroes (loved Spider-Man: Into the Spider-Verse). And like many others, I appreciate an antihero (looking at you again, Han Solo). But it takes effort to make a character not only real but admirable even if he or she never utters an ounce of snark. I can’t help thinking of the elevator scene in the 2014 film, Captain America: The Winter Soldier. Boring is not a word I would use to describe Cap. Sincere and willing to fight for what’s right—definitely.

Some view sincerity as “boring.” But I’m reminded of the 2017 Wonder Woman movie and how many admired Wonder Woman for that trait.

I appreciate Chris Evans’s desire to make the character he plays real. If you look at any of the Marvel films featuring Cap, you’ll notice that he never tries to hide how he feels, while some people, on the other hand, use snark to hide what’s real about them.

When I was growing up, sarcasm never worked with Mom. (See how I worked this back to Mom? Makes this kind of a Mother’s Day post after all.) I couldn’t use it with Dad either, especially once he gained a master’s degree in counseling psychology and would talk about the “walls” of sarcasm. But Mom would give me a look that said, “You are fooling no one. What’s the real story?”

What traits do you admire in a hero (and by hero I mean male or female)? While you think about that, I’ve got a book to give away: Up for Air by Laurie Morrison. (Click here for the interview with Laurie.)

And that book is going to Penny at LifeontheCutoff’s Blog.