Ahoy there, mateys! Glad I am ye stopped by today. With me on the blog is the awesome Steve Bramucci, who is here to talk about his middle grade adventure novel, The Danger Gang and the Pirates of Borneo! ’Twas illustrated by Arree Chung, and then published by Bloomsbury on August 1. For a synopsis, go here. 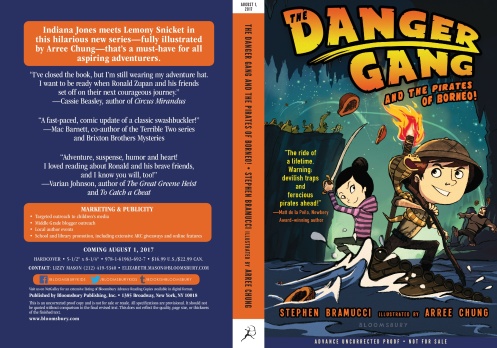 Steve is represented by Sara Crowe. In a few minutes, I’ll tell ye all about a giveaway for The Danger Gang and the Pirates of Borneo! But first, let’s have a chat with Steve!

El Space: Four quick facts about yourself?
Steve: Random facts? Book related facts? Important life facts? Orangutan facts? I’ll try one of each!
1. Even though I write about exotic food, my all-time favorite meal is just rotini overloaded with parmesan cheese. It was my favorite as a boy and the draw of “flavor nostalgia” still gets me at least once per week. I was traveling around the world a few years ago and missed pasta with parmesan so badly that I had a friend bring me some Kraft parmesan when we met up in Cambodia.

2. The first page of The Danger Gang and the Pirates of Borneo!—in which the narrator introduces himself—remains virtually unchanged from its very first incarnation, written during a break at an SCBWI conference. Everything else has changed drastically from those early days.
3. My dad died two weeks after the book sold.

El Space: So sorry. You have my condolences.
Steve: He was such an amazing guy that I’ve always worried I won’t be able to measure up to his legacy. That, really, is the theme of the book: One boy’s longing to impress his parents and step out of their giant shadows.

4. Orangutans are a truly astounding species and critically endangered due to habitat encroachment. A portion of my proceeds from the book go here. Anyone who decides they want to donate to that charity, or any other orangutan initiative, can email me on my website for some free Danger Gang swag!

El Space: Awesome! You wear a lot of hats, including managing editor at Uproxx, and you’ve written travel articles for many publications. How did you come to write children’s books?
Steve: I’m actually surprised that more travel writers don’t start writing for kids. Travel is basically the real life incarnation of our childhood fantasies about adulthood—the way that we thought adulthood would feel when we were young. For me, travel writing is the chance to live out my boyhood adventure dreams, and writing this book was right in line with that.

The journey to writing for kids was actually a little longer than me just pivoting all at once. I’ve been telling pirate stories to kids at schools and events near my home for more than a decade now, I’ve been involved in SCBWI, and even written another, unsold, novel. It wasn’t until I went to the Vermont College of Fine Arts that all the pieces congealed.

The author, livin’ the life

El Space: The Danger Gang and the Pirates of Borneo reminds me of the fun of adventure stories like the Indiana Jones movies—at least the earlier ones—and The Goonies. What was the inspiration behind it? How did your main character, Ronald Zupan, come to be? Why was a pet cobra an ideal pet for him?
Steve: I definitely wanted the book to feel pulp-y, like an old-timey serial. The Indiana Jones connection was obviously intentional and you can see that in the way the book is packaged. Semi-side note: For me, modern technology rarely serves adventure, so Ronald and his friends sort of exist in a vague pre-tech era (50s? 40s?). You won’t see cell phones or computers or… I actually made great efforts to avoid mentioning any plastic objects all together.

The Goonies is a huge reference point too. I love stories where the basic pitch is: “Kids go on an adventure and learn stuff along the way. Also, there are mean bad guys with bad oral hygiene.” Bloomsbury calls the book Indiana Jones meets Lemony Snicket which is the most flattering “blank meets blank” analogy I could ever hope to receive. 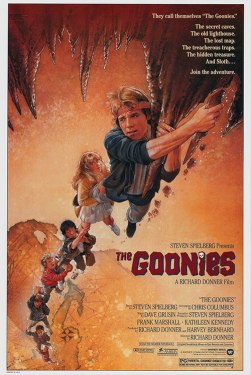 As for the cobra, there are a few big reasons:
• I’m highly allergic to cats and house dogs, so I always had reptiles as pets. My dad would take me to a farm and let me keep whatever snakes I could catch.
• Indiana Jones hates snakes and I love them, so I wanted to give that massive series a little poke in the ribs by having Ronald be a snake lover.
• Ronald would never have an ordinary pet, so the choice feels very natural for the character.
• But mostly, it just came to me and people laughed. When I read something and people laugh, I suddenly become very attached to that bit. 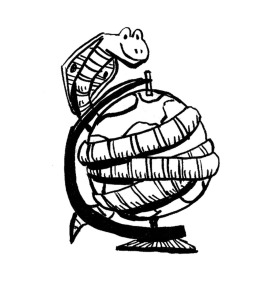 El Space: Are you a pantser or a plotter? What’s your writing process?
Steve: I’d say I’m … a little of both. I’ll outline, but if some idea strikes me, I’m quick to ditch my notes. I’ll follow whims without much convincing. I also don’t outline before the first major turning point. I like to keep the early pages moving and full of that electric energy.

In this series, Ronald and I are so similar in mindset that most of the time I just have to ask: “What would I do next in this situation?” By following that thought process, I manage to get Ronald in a lot of trouble.

El Space: You’ve traveled extensively. Of the places you’ve visited, which is/are your favorite place/places to return to again and again? Why?
Steve: I get asked the “favorite place” question a lot and my answer hasn’t changed in a long time now: Madagascar is my #1 place on earth. It’s just … for the adventure traveler, it’s really perfect: Affordable, exciting, not over-touristed, and unique, with incredibly kind people and a fascinating local culture. Also, the whole mini-continent has a rich pirate history and, as you know, I love pirates.

As for a place to return to, I’m going to say the American Southwest. It’s just so iconic, so different from citified-America, so full of sprawling landscapes and potential for adventure. Every few years I go to Canyon de Chelly and ride Navajo ponies through the canyon for a few days. That’s one of my favorite shorter trips on earth.

El Space: You’re going around the world, but can only take three things besides a passport. What would you take and why?
Steve: Objects? A surfboard, an iPod without internet capability, and a good book—maybe a compendium of Twain or a copy of The Princess Bride. With that set up, I could travel for a year without much complaint.

El Space: What will you work on next?
Steve: I’m finishing the edits on The Danger Gang and the Isle of Feral Beasts right now!

Thanks, Steve, for being my guest! 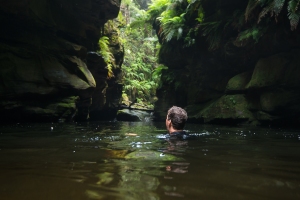 The Danger Gang and the Pirates of Borneo can be found at Amazon, Barnes and Noble, and Powell’s. But one of you will find a copy of it at your doorstep—or tablet if you prefer—simply by commenting. Winner will be announced on August 14.

27 thoughts on “Check This Out: The Danger Gang and the Pirates of Borneo!”