I’ll reveal the winner of Like Water on Stone by the amazing Dana Walrath in just a minute. But first . . .

Today, I finished reading an article by Tim Stack in Entertainment Weekly (Dec. 5 issue). The subject: Greg Berlanti, the co-creator of The Flash and Arrow, hit shows for the CW. I could mention how an article like that is the perfect bathroom reading, but I wrote a post on that subject before. So I won’t go there now. (You get it? Go there? Okay, I hear you. Some puns shouldn’t exist.) Anyway, Greg is not only involved with the above mentioned shows, he has another hit show on NBC (The Mysteries of Laura) and is developing a show about Supergirl for CBS. If that’s not enough, he’ll be the head writer for the next Oscars broadcast. And that’s not all. The guy has a long list of projects for which he’s either a writer, co-creator, or executive producer. Just reading the article exhausted me. But after reading it, I realized that Berlanti exemplified what I’d discussed in my previous post—writing with abandon. Thanks, Greg!

The following quote struck me:

Berlanti has been a huge comic-book fan since he was young, and seeing him at work is like watching a kid play with his favorite superhero toys. . .except these action figures will be life-size when production starts. (44)

Love for what he’s doing seems to be the key to Berlanti’s quantity of projects. (That and opportunity.) Another plus in Berlanti’s favor is a testimonial from Chris Pratt, who was part of the cast of one of Berlanti’s past shows, Everwood: “He’s capable of showing real heart without being melodramatic.”

Passion. Real heart without melodrama. Sounds like a winning combination, doesn’t it? Wouldn’t we all like to achieve that balance? It takes a delicate touch. 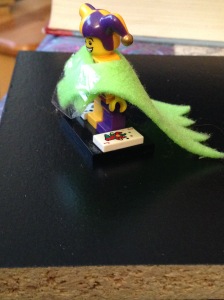 Jordie hopes that someday a television show is developed about him. He has a cape ready just in case. He’s sure that his story has real heart, and not an ounce of melodrama.

His first order of business: mopping the floor with his arch-nemesis: Hello Kitty (code name: HK). Don’t let the cupcake and the bow fool you. She’s wanted in fourteen states for being a supervillain. Coincidentally, she has seen her favorite movie, Megamind, fourteen times. Be afraid.

Getting back to Greg Berlanti, whatever he’s doing seems to be working, judging by the many viewers his shows have earned. I’ve been meaning to watch The Flash and Arrow. Have you seen them? I’ll get around to them at some point. But for now, my time would be better spent doing what I’m passionate about: weaving works of a high fantasy nature and crocheting whimsical hats. As I’ve mentioned before, I need to make several hats like this in the coming weeks. 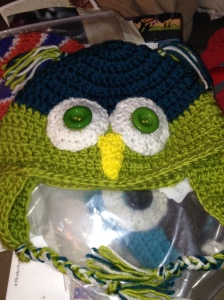 Unlike HK above, this hat has no desire to take over the world. . . .  At least not that I know of. Be afraid.

And speaking of someone who writes with abandon, let’s get to the winner of Like Water on Stone by the multitalented Dana Walrath. (See interview here and here.)

Jill Weatherholt, come on down! Please comment below to confirm. Thank you to all others who commented.

31 thoughts on “Writing with Abandon”