Feels like forever since I last posted or stopped by other blogs to say hi. With two deadlines soaking up most of my time last week and this past weekend devoted to my uncle’s funeral and family gatherings, I felt a bit overwhelmed. The following is the post I wrote last week, but put aside until now. I hope to return to my routine this week.

What is it about a baby shower that makes men’s eyes glaze over? I’m always amused when I see how fast guys scurry away as they drop their wives/partners off or run out the door if their wife/partner is the one throwing the shower. Yet my extremely busy week of curriculum projects due now, now, now culminated in a baby shower, for which I had to crochet sixteen kittens. (Sounds like a fifties song, “Sixteen Candles.” “Six-teen kit-tens!”) So, I’m sorry to have missed reading many of the blogs I usually read, since I had next to no free time whatsoever, even to post on my own blog. 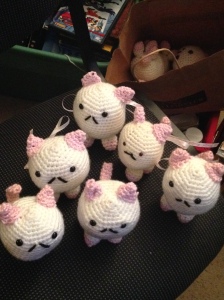 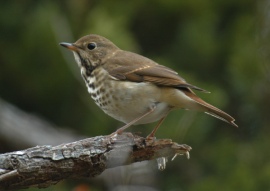 Speaking of now, now, now, the other day, as I waited in my car at a light, watching tiny birds like brown teacups gathered at a street corner, I thought about a quote I read in Entertainment Weekly’s double issue (September 19/26).

“I think we have to get to stuff faster probably than we otherwise would have,” [Andrew] Kreisberg sighs. “Everybody is telling stories a lot faster on TV now.” 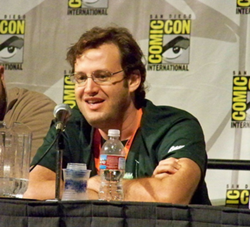 Who’s he? The producer of the upcoming new series The Flash, the CW network’s vehicle for DC’s comic book hero, the Flash—“the fastest man alive.” Grant Gustin stars as the Flash. The quote is Kreisberg’s answer to the question of how the series will roll out the Flash’s powers—all at once or gradually? Inquiring minds wanted to know. But Kreisberg’s words raised questions within me beyond those having to do with the Flash’s abilities.

With so many shows for viewers to choose from, I totally get the need to quickly grab viewers’ attention. A trip to Half Price Bookstore helped me see that. As I wandered in the section for MG and YA books, I felt overwhelmed by the amount of books on the shelves, books screaming for my attention. Many were written by authors I’d never heard of. I scanned the first pages of some of them before I quickly moved on.

Skimming books in a bookstore doesn’t give justice to the authors who slaved over their manuscripts like great chefs—meal maestros who slave over a hot stove. And I don’t mean to convey that a book’s greatness should be judged by one hastily skimmed page nor that a television show’s worth is proved by how quickly viewers are gripped. After all, good storytelling often plays out over several pages and or over a season in television. Yet many people allow only one shot–a fleeting opportunity to quickly engage them or lose them forever.

I hope that the “fast” storytelling Kreisberg mentioned doesn’t mean that time spent crafting compelling characters will take a backseat while gimmicks and formulaic action sequences are thrust into the driver’s seat. That method of storytelling causes me to scurry away from a television program or a novel.

While I like to be engaged in a story early on, I also like to care about the characters beyond So-and-so’s hunt for his partner’s/wife’s/girlfriend’s/brother’s killer while he deals with his own issues with rage/PTSD/addictions. Of course this is not a description of the Flash/Barry Allen, whose antics I used to read about in comic book form. But I’m hoping that “fast” storytelling refers to his famed speed only and not to slapdash characters. Otherwise, I’ll be gone in a flash.

What do you think “fast” storytelling means? What’s the fastest way to engage you in a story?

Grant Gustin as the Flash from screencrush.com. Bird from aconerlycoleman.wordpress.com. Andrew Kreisberg from arrow.wikia.com.