Hello! Please join me in welcoming to the blog once more the luminous and enlightening Laurie Morrison! I really, really, really wish I had a brownie like the ones Laurie wrote about in Rebound, her young adult novel. I could also go for a slice of pie! (Mmm. Pie.) Let’s move on, since I can’t get either one just now.

If you’re reading this blog for the first time ever, welcome to you too. But I have to tell you that this is the second part of the interview with Laurie. The first part is here.

Laurie: Hmm, that’s a good question. Once I decided to make Lissy’s dad an antagonist, I thought about her insecurities and considered how I could turn him into someone who would especially push her buttons. That involved turning him from a not-very-successful lawyer into an entrepreneur who takes risks, thinks people should look out for their own interests, and has never valued Lissy’s interest in baking. I did a lot of free-writing about Lissy and her dad’s back story, to figure out precisely when and how he had made her feel not good enough, but then I also figured out what her dad has going for him and why Lissy’s stepmother, Kim, fell in love with him. When I turned him into an antagonist, that actually opened up possibilities for Kim to become a rounder and more important character.

As for creating a nuanced and realistic heroine, one thing that really helped me was to free-write scenes between Lissy and each of the other key characters, both from the past and from the summer when the book takes place. Some of these scenes made it into the story and many did not, but I got a fuller picture of Lissy as I saw how she interacted with others and came to understand the relationships that have shaped her.

El Space: You’re writing a series of blog posts on first-person narration. (If you want to read them, start here.) What excites you most about this perspective?

I find it fascinating to read books with narrators who turn out to be quite unreliable, such as Code Name Verity by Elizabeth Wein and Inexcusable by Chris Lynch. But then I’m also interested in narrators who aren’t unreliable on purpose, but who aren’t unequivocally reliable, either, because any person’s perspective is subjective and in some ways limited. No narrator can attend to everything that is going on all at once or truly know where others are coming from. 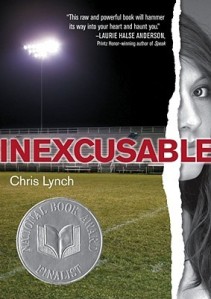 Some narrators are closer to the wholly reliable end of the spectrum than others, but it’s still important to think about when those largely reliable narrators might not be seeing a character or situation accurately and what their blind spots or defense mechanisms might be. I love to write and read about characters who are relatable and engaging but also clearly fallible. I think it’s a powerful experience to love and identify with a first-person narrator while also understanding her limitations and rooting for her to grow.

El Space: Cool! I wish I could quote directly from the podcast interview I heard with Ally Carter some months ago. But she mentioned having a niche in the marketplace. She’s known for a certain type of book. I happen to love her books. What do you see as your niche? Why?
Laurie: If I continue to write the kind of stories I’ve been writing—and if, you know, people actually want to read those stories—my niche would probably be writing books for the younger end of YA readers.

Most of my 6th, 7th, and 8th grade students read young adult novels instead of, or in addition to, middle grade books. The term middle grade is actually kind of confusing, because it doesn’t really correspond to middle school years. I gravitate toward writing stories that would be good for middle school students who are ready to read about teenage experiences, but might not be quite ready for all of the content in “older” YA books.

That doesn’t mean that I censor myself when I’m writing or exclude certain things on purpose because I am trying to send a certain positive message. It just means that if I really think about my intended reader, I imagine myself at age 13 or 14 or one of the students I’ve gotten to know especially well, and my sense of that intended audience influences which stories I choose to tell.

El Space: They’re all awesome. What writing advice, if any, have you received that electrified your writing?
Laurie: [VCFA’s own] Alan Cumyn taught me that it’s very compelling to watch a character who won’t let herself have something we know she really wants. Franny Billingsley taught me to identify a character’s vacuum—the longing or hole that the character is struggling to fill. Mary Quattlebaum taught me that if you give a character a driving passion, that passion can help shape your character’s voice and make it sound distinct. And Shelley Tanaka taught me that subplots need to enrich or mirror the central story, and too many subplots can make a story less powerful.

Thanks, Laurie, for being my guest! You’ve been awesome. But next time, please bring brownies.

Those of you who stopped by can find Laurie at her blog or on Twitter. If you have questions for Laurie, please comment below. You can also answer this question: Which antagonists have you read reacently which seemed “nuanced and realistic”?

Book covers by Goodreads. Pie photo from Wikipedia. Round character poster from mhaywood.blogspot.com.